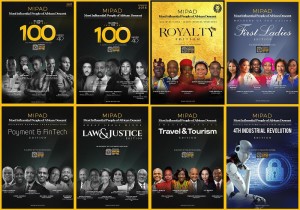 ADDIS ABABA, Ethiopia, 7th February 2019,-/African Media Agency (AMA)/-
The Executive team of the Most Influential People of African Descent (MIPAD), has unveiled today the special editions of the Most Influential 100 publications in support of the United Nations International Decade for People of African Descent. MIPAD identifies high achievers of African descent in public and private sectors from all around the world as a progressive network of relevant actors to join together in the spirit of recognition, justice and development of Africa, its people on the continent and across its Diaspora.
As this decade is now officially recognized by the African Union Commission Diaspora Division, Citizens and Diaspora Organizations (CIDO), the launch of MIPAD new editions will take place on the sidelines of the 32nd Ordinary Summit of the African Union on Saturday, 9th February 2019, 12pm – 5pm at Hilton Hotel, Addis Ababa, Ethiopia.
Starting in 2019, in line with the first pillar of the UN decade; RECOGNITION, MIPAD set to identify, recognize and connect Most Influential 100 personalities across new verticals, aside from Under 40 Edition, in support of the UN International Decade for People of African Descent.
The New MIPAD 100 Editions include :
Speaking about the event, Eiman Kheir, Head of Diaspora Division in the Citizens and Diaspora directorate , said ” The AU considers the African Diaspora the sixth region of Africa due to the fact that it constitutes large number of people of African descent currently residing outside the continent. As a partnership, the relationship seeks to realize how Africa and the diaspora can support each other. Recognizing the decade, is one way towards guaranteeing justice, recognition, anti-racism, and development to African persons across the world, and it is at the heart of what Africa can do to uphold the dignity of its People.»
H.E Fatima Maada-Bio, First Lady of Sierra Leone, one of the headliners featured on the cover of the First Ladies Edition in a statement said, “I am a different first lady. My aim is not to score political points, but to let women know that they must not only be servants in the kitchen but also major players in the boosting of our economy.” She shared her appreciation of the work MIPAD is doing saying, “if we don’t celebrate ourselves, who else will?.”
In collaboration with MIPAD the Office of the First Lady of Sierra Leone is inviting the Most Influential 100 and others in the Diaspora to Freetown for Independence Day and the Door of Return business, cultural & heritage tourism April 25th – May 2nd 2019 in celebration of UNESCO 25th Anniversary of the Slave Route Project and recognition of the 400th Anniversary of the Transatlantic Slave Trade.
Since 2017, MIPAD has shed lights on the great achievements of the People of African Decent under 40 across the globe, working towards a positive narrative for the continent. MIPAD has recognized over 400 high achievers of African Decent both in the public and private sector worldwide, pairing those based across the Diaspora with their counterparts inside Africa, across various verticals, and will be releasing the global 100 lists annually until 2024.
Kamil Olufowobi, Founder of MIPAD, commented “We have great minds across the globe working at an individual level for the glory of other countries and corporations. We must harness the power of these great minds in every corner of the world to create collective impact for our beloved continent. That is why MIPAD exists.”
FOR MORE INFORMATION ABOUT RECOGNITION WEEK (INSIDE AFRICA), click HERE
FOR MORE INFORMATION ABOUT DOOR OF RETURN, click HERE
FOR MORE INFORMATION ABOUT MIPAD, click HERE
Distributed by African Media Agency (AMA) on behalf of MIPAD.
About MIPAD
Most Influential People of African Descent (MIPAD), is a global civil society initiative in support of the United Nations International Decade for People of African Descent, focusing our efforts on the 1st pillar; RECOGNITION.

MIPAD publishes a unique global 100 list that identifies high achievers of African descent worldwide, pairing those based across the Diaspora with their counterparts inside Africa, across various verticals, annually until 2024.