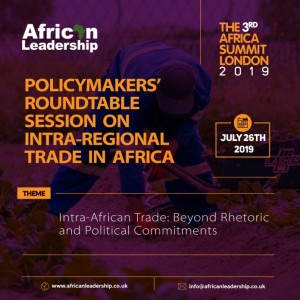 EVENT’S BRIEF
The African Leadership UK Limited and the Centre for Economic and Leadership Development (CELD), presents the Policymakers’ Roundtable Session on Intra-Regional Trade in Africa, on the margins of the 3rd Africa Summit – London 2019, with the theme set as: Intra-African Trade: Beyond Rhetoric and Political Commitments.

African countries over the years have adopted a number of Regional Trade Agreements (RTAs) intended to promote trade among themselves, such as the Protocol on Free Movement of Persons, Right to Residence and Right to Establishment, the Single African Air Transport Market (SAATM), as well as the landmark Africa Continental Free Trade Agreement (AfCFTA, a landmark agreement which the UN Economic Commission for Africa (UNECA) estimates will boost intra-Africa trade by 52.3 per-cent.

It is however instructive to note that experts and key stakeholders have also raised practical issues that impede a strong intra-Africa trade and regional integration, such as poor infrastructure, streamlining regulations, access to finance by the private sector, and customs processes. Therefore, the “Policymakers’ Roundtable Session on Intra-Regional Trade” is a High-level for key domestic and international policymakers from across AU member states and the International Development Institutions, as well as policymakers from Europe, United States and Asia, to engage in a candid and constructive dialogue on recent developments on intra-Africa trade.

OVERVIEW OF THE AFRICAN SUMMIT
The Africa Summit is a premier and annual programme of the African Leadership magazine, since 2017, that brings together Business and Political Leaders as well as Key Stakeholders under one roof to connect with one another, celebrate innovation, entrepreneurship and development in the continent, and explore diverse thoughts and perspectives on issues relations to the social, economic and environmental sustainability of Africa. While previous editions of the summit have attracted over 250 leaders from across Africa, United States and the United Kingdom, the 2019 edition promises to be even bigger with the theme set as: Intra-African Trade: Beyond Rhetoric and Political Commitments.

For more information on participation and sponsorship, please contact our office, as shown below-

RSS Feeds
va-Q-tec supports pharmaceutical industry in Asia with worldwide logistics of COVID-19 diagnostic kits
Fri, May 29, 2020
Media Outreach
Communication Regarding the Whistleblowers’ Complaint Against the President of the Bank
Thu, May 28, 2020
African Media Agency