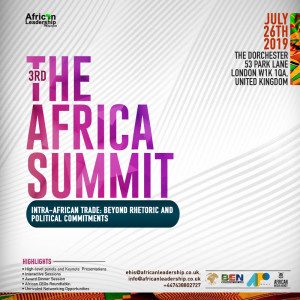 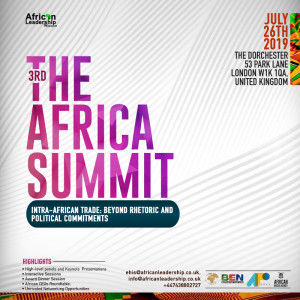 The Africa Summit is a premier and annual programme of the African Leadership magazine bringing together Business and Political Leaders as well as Key Stakeholders under one roof to connect with one another, celebrate innovation, entrepreneurship and development in the continent, and explore diverse thoughts and perspectives on issues relations to the social, economic and environmental sustainability of Africa.

Commenting on the partnership, African Leadership magazine CEO, Ken Giami noted that this year’s summit is deemed to be more successful. “The coming on board of AMA was a real shot in the arm for the summit. Not only will they bring on board media expertise but will also help steer our agenda to the highest level. This year’s summit theme; Intra-African Trade: Beyond Rhetoric and Political Commitments. This is totally in line with what AMA strives for”

African countries over the years have adopted a number of Regional Trade Agreements (RTAs) intended to promote trade among themselves, such as the Protocol on Free Movement of Persons, Right to Residence and Right to Establishment, the Single African Air Transport Market (SAATM), as well as the landmark Africa Continental Free Trade Agreement (AfCFTA, a landmark agreement which the UN Economic Commission for Africa (UNECA) estimates will boost intra-Africa trade by 52.3 per-cent.

The “Policymakers’ Roundtable Session on Intra-Regional Trade” is a High-level for key domestic and international policymakers from across AU member states and the International Development Institutions, as well as policymakers from Europe, United States and Asia, to engage in a candid and constructive dialogue on recent developments on intra-Africa trade.

The partnership positions AMA as the official media partner for this noble event. AMA will use its vast skills and network to promote the visibility of the event. “As an authoritative voice in the African media landscape, we feel honoured to be part of this summit. Positive African narrative is at the core of our business and we will always endeavor to make sure that we are part of the voice for the positive transformation and development of the continent,” noted Eloine Barry African Media Agency’s founder and CEO.

While previous editions of the summit have attracted over 250 leaders from across Africa, United States and the United Kingdom, the 2019 edition promises to be even bigger.

About African Media Agency (AMA)
AMA – African Media Agency (http://amediaagency.com) specializes in helping companies grow their share of voice on a pan-African scale. Our deep knowledge and understanding of the continent helped us gain recognition and act as an authoritative source of news for the most influential media houses in every African country.
Our offices are in Dubai (UAE), Abidjan (Cote D’Ivoire), Libreville (Gabon), New York (USA) and we have local presence in Johannesburg (South Africa), Nairobi (Kenya) and Lagos (Nigeria). Our team has ten years of experience across the Communications spectrum on a pan-African scale. We intimately understand the diversified and often complex business environment in each African country and guide our clients with best practice on every step of their African journey.

ABOUT THE ORGANISER
The African Leadership magazine is published by African Leadership (UK) Limited, a company registered in the United Kingdom (Company No. 07435198). The magazine focuses on bringing the best of Africa to a global audience, telling the African story from an African perspective; while evolving solutions to peculiar challenges being faced by the continent today.

Since its maiden edition in August 2008, African Leadership Magazine has grown to become a leading pan-African flagship leadership-focused publication read by over 500, 000 targeted international investors, business executives, government policy makers and multilateral agencies across Africa, the Middle East and Asia, Europe and the US. It is distributed at major international and African Leadership events around the world. The magazine has over one million (1 000 000) fans on Facebook and a virile readership on other social media. It is a niche and unbiased African voice born out of a desire to ameliorate the lot of Africans by focusing on individuals and corporate bodies that are known for their legacy-based approach to leadership.