Known for bringing in celebrities and smiling in photographs next to former Western leaders, a flamboyant Nigerian newspaper publisher now faces a challenge from... 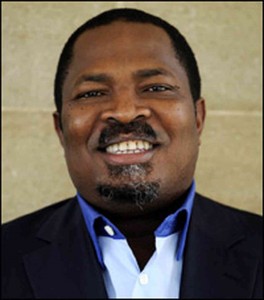 Known for bringing in celebrities and smiling in photographs next to former Western leaders, a flamboyant Nigerian newspaper publisher now faces a challenge from his most vocal critics — his own employees.

Workers have barricaded the front of ThisDay newspapers in Lagos, hoping to force publisher Nduka Obaigbena into paying them as much as four months’ worth of back salaries due to them. Back pay disputes often hit industries in Nigeria, a country where steady paying jobs remain few, but this crisis has hit a man politically connected to the nation’s ruling elite.

“He’s stepped on our toes. Believe me, we’re not going to back down,” ThisDay employee Tony Enabulele said. “He knows the top people, so he gets away with it.”

Staffers parked several pickup trucks in front of the ThisDay office Friday, located near Lagos’ grimy Apapa Port. Tthe printing plant and the main editorial office overlooking the port were closed, secured with padlocks. Outside, staffers milled around with cardboard signs with slogans like “We reject slavery.”

The industrial look of the office space clashes against Obaigbena’s image as a wealthy playboy who has brought in artists like Jay-Z, Beyonce and Snoop Dogg to Nigeria. His award shows have featured former U.S. President Bill Clinton several times, as well as former British Prime Minister Tony Blair, former U.S. Secretary of State Condoleezza Rice and others. That has meant hundreds of thousands of dollars in performance and speaking fees.

Meanwhile, union leaders and workers say Obaigbena routinely shorted them on their salaries and kept withholding taxes and obligations for himself. He has close ties to major business leaders and those in the ruling People’s Democratic Party. But lately, it appears as though Obaigbena has been suffering a cash crunch. He cancelled his annual fashion week, which brings designers from around the world. Meanwhile, he continues to pump money into a satellite news channel called Arise TV. A previous effort to start a ThisDay newspaper in South Africa collapsed.

In a memo to staff sent April 4, Obaigbena promised to pay all outstanding salaries within 30 days. He blamed the salary problems on costly repairs that insurance policies didn’t cover following an April 2012 suicide car bombing on the newspaper’s Abuja office that killed three people and wounded others.

“No one planned for a terror attack in Nigeria and so we were left to fend for ourselves,” Obaigbena wrote in April.

Staffers at ThisDay in Lagos say some of them will sleep in front of their office gates until they receive their salaries.