Bayelsa State Governor, Hon. Seriake Dickson and 8 other Governors from the South-South and South-East met in Asaba, Delta State capital to review the... 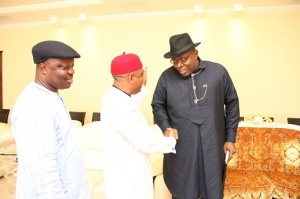 From Right: Governor Seriake Dickson of Bayelsa State, felicitates with his Abia State Counterpart, Chief Theodore Orji, while the host Governor, Dr. Emmanuel Oduaghan of Delta State, looks on with delight, at the South-South/South-East PDP Governors/Leaders Forum held in Asaba.

Bayelsa State Governor, Hon. Seriake Dickson and 8 other Governors from the South-South and South-East met in Asaba, Delta State capital to review the state of the nation and called on the Federal Government to intensify its development efforts by building critical infrastructure in the zones.

Arising from the meeting, the Governors issued a nine point communique, which was jointly presented by the Chairman South-South Governors forum, and Governor of Cross River, Senator Liyel Imoke with his Anambra State counterpart, Mr. Peter Obi.

The Governors urged the Federal Government to develop additional deep sea ports in the region such as Agge in Bayelsa State, Ibaka in Akwa-Ibom and Escravos in Delta as well as a dry port in Abia State.

They also called for the dredging of the Calabar port in Cross River State as well as the facilitation of the full implementation of the free trade zone status amongst states of the region.

While commending the Federal Government for the ongoing rehabilitation and modernization of airports as well as rail lines across the country, they stressed the need for the establishmment of cargo airports in the zones including Owerri, Imo State.

According to the communique, the Governors resolved to strengthen economic and political cooperation between the two geo-political regions with particular focus on development of infrastructure linking the regions especially federal roads.

Speaking on behalf of the South -East Zone, Governor of Anambra State, Mr. Peter Obi called on Nigerians and friends of the country to support the President Goodluck Jonathan in the fight against terrorism, kidnapping, pipeline vandalisation and other criminal activities that are hindering the developmental efforts of the present administration.

The South-South and South-East Governors also appealed to the people of the country to employ dialogue and other peaceful means in resolving issues affecting the nation.

The Rivers State Governor, Rotimi Amaechi was represented at the meeting by his Deputy, Engr. Tele Ikuru.