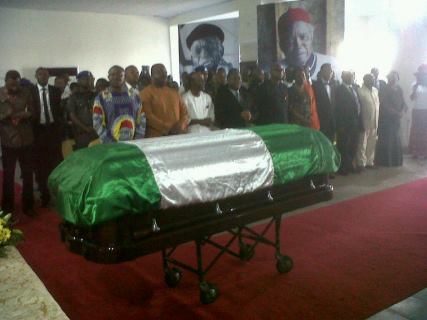 Writer Chinua Achebe, whose works focused on the conflict between modernity and the way of life in rural Nigeria, has returned home for the... 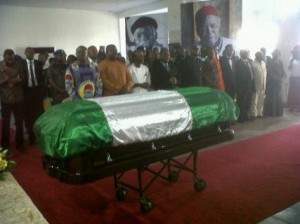 Writer Chinua Achebe, whose works focused on the conflict between modernity and the way of life in rural Nigeria, has returned home for the final time.

Achebe’s corpse arrived Wednesday in his native Anambra state. There, local government officials and writers feted the late novelist, who died in March at the age of 82. While the man himself hated the trappings of power in Nigeria, which include looting government funds, local elected officials arrived in tinted-glass SUVs with police sirens wailing.

Achebe, the internationally celebrated Nigerian author, statesman and dissident, died in Boston after a brief illness. He lived through and helped define traumatic change in Nigeria, from independence to dictatorship to the disastrous war between Nigeria and the breakaway country of Biafra in the late 1960s. He knew both the prestige of serving on government commissions and the fear of being declared an enemy of the state. He spent much of his adult life in the United States but never stopped calling for democracy in Nigeria or resisting literary honors from a government he refused to accept.

His books include “Things Fall Apart,” which propelled him into international acclaim, as well as his recent autobiography about his experience during Nigeria’s civil war called “There Was A Country.”

On Thursday, Achebe’s body will be buried in his family’s home in Ogidi, a small town in the rolling red-dirt hills of Anambra state. Locals planned a wake to last through the night to honor him.