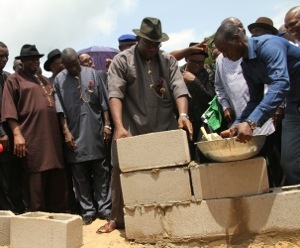 In fulfillment of his promise, Bayelsa State Governor, Hon. Seriake Dickson has laid the foundation stone for the construction of the Adaka Boro Memorial...

In fulfillment of his promise, Bayelsa State Governor, Hon. Seriake Dickson has laid the foundation stone for the construction of the Adaka Boro Memorial Institute at Boro Town in Kolokuma/Opokuma Local Government Area of the State.

Governor Dickson who described the project as symbolic, said it would form part of the measures his administration has lined up to properly immortalize the late Ijaw hero, Major Isaac Jasper Adaka Boro.

When fully developed, the institute will comprise a mausoleum for the late freedom fighter, residential estates with houses for deserving personalities.

He noted that the project when completed would not only stand in honour of Late Adaka Boro, but also serve as a befitting venue for subsequent celebrations.

According to the Governor, the road linking Boro Town has reached 90 percent completion and would be commissioned in a couple of weeks, noting that the Ministry of Works would be mobilized to the site to facilitate the project.

While commending the traditional rulers and the people of Kolokuma/Opokuma for supporting government in maintaining peace, Hon. Dickson urged them to cooperate with the contractors handling various projects in the area, such as the model secondary school and the permanent orientation camp for the National Youth Service Corps.

In an address presented on behalf of the Kaiama Community, the Chairman of the 2013 Boro Day Planning Committee, Appah Walson Gbeinpei, appealed to the Governor to declare a day as public holiday in honour of Late Adaka Boro.

Mr. Appah noted that the ideals of the late hero would continue to inspire the Ijaw Nation in its quest for justice, fair play and equity in the country.

He hailed the Governor for the construction of the NYSC orientation camp, general hospital as well as a model boarding secondary school in Kaiama community

The Governor later visited the palace of the Ibedaowei of Kolokuma Kingdom, King Mozi Agara, where he commended the traditional institution in the State for their desire to collaborate with Government in the execution of development projects in their domains.

The event also witnessed the laying of wreaths by Governor Dickson, Ijaw National Congress (INC) President, Senator Tari Sekibo, Chief Diepreye Alamieyeseigha, who laid a wreath on behalf of Chief Edwin Clark and the first son of Late Boro, Felix as well as the firing of three canon shots at the cenotaph of Isaac Boro.