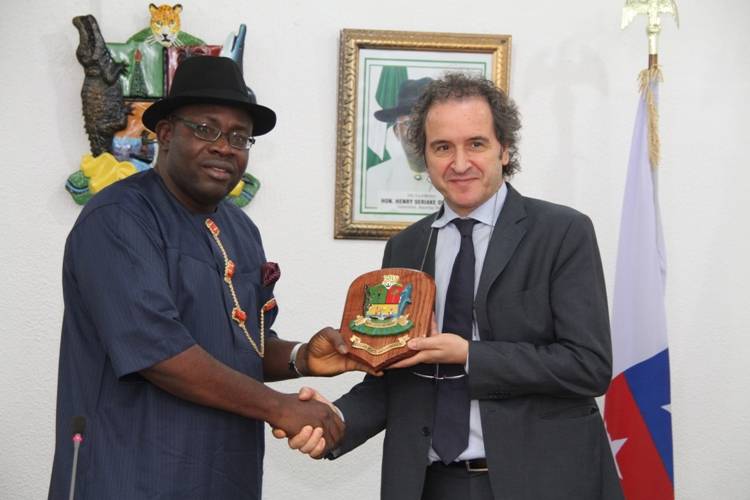 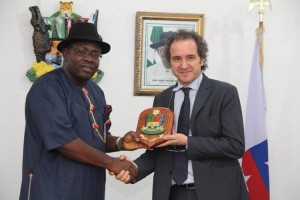 Governor Seriake Dickson of Bayelsa State and the Managing Director of the Nigerian Agip Oil Company, Mr. Ciro Pagano have decried the alarming increase in oil theft in the Niger Delta region.

Receiving a delegation of the NAOC management in his office in Yenagoa, Hon. Dickson said the situation was becoming worrisome, noting its effects on the economy of not only Bayelsa State, but the Nation as a whole.
Reiterating his administration’s zero tolerance for crime and criminality, he disclosed that government will set up the maritime equivalent of Operation Doo Akpo to man oil installations across the State as well as ensure security of lives and property on the waterways.
“We are going to deploy the maritime equivalent of Operation Doo Akpo in the riverine areas.  That means we are going to do what we have done in the upland by building check-points across the creeks with communication gadgets, gunboats and other facilities including more manpower, their training and allowances.  That is why all of us who are joint stakeholders in the preservation of security particularly in the areas where you operate have to come together and work more closely.  We are not interested in collecting money from our partners.  What we are interested in is a collaborative frame-work”.
The Governor, who lamented the absence of functional offices of multi-national companies operating in the State, called for the establishment of such offices, adding that aside boosting the IGR of the State, it will also generate employment opportunities for the teeming youths of the State.
According to Hon. Dickson, the present administration’s ambitious development plan requires a lot of funds to drive, stressing that the establishment of befitting offices will equally enhance the aesthetic beauty of the state.
He said, “I’ve always said that we see you people as our development partners particularly Agip because as you know the bulk of your operations are in Bayelsa.  But again there are contradictions that come with that, and I will not fail to point out the contradiction in terms of the absence of an operational office that befits our contributions to your corporate business.
“If you are here you will support us in terms of taxes and revenues which your company has been depriving us of all these years by not having an appropriate corporate presence here.  Meanwhile we need those funds to support our ambitious development drive.  If we have money and we are able to meet our responsibilities, we can then work better to create a saner operating environment”.
Governor Dickson also urged the state development partners to collaborate more effectively with government in leveraging the mechanisms that have already been provided by the Security Trust Fund.
On its part, he said his administration would not relent in making the right investments in security, disclosing that the state government was putting finishing touches to launch the first ever state-wide electronic surveillance project in the country.
The State Chief Executive, who condemned acts of pipeline vandalism and oil-theft across the country, however identified insider abuse and inappropriate operational modalities of oil companies as some of the factors responsible for perpetration of the unwholesome practices.
“The briefs that I have received also point at some level of complicity by even the operating multinational firms.  It takes a level of sophistication and insider knowledge of your industry and your operational modalities to be able to carry out this huge level of theft and brigandage that is going on.
“I’m also aware (may be unknown to you) that you people work with a lot of people who are themselves a threat to the security of our state, region and nation”.
Earlier in his remarks, the Leader of the delegation and Managing Director of the Nigerian Agip Oil Company, NAOC, Mr. Ciro Antonio Pagano described the current trend and occurrences of oil theft as alarming.
Mr Pagano explained that the team was in the state to hold discussion with government on how best to solve the nagging problem.