Bayelsa State Governor, Hon. Seriake Dickson has attributed his achievements in life, especially his elevation to the position of a Governor of the state... 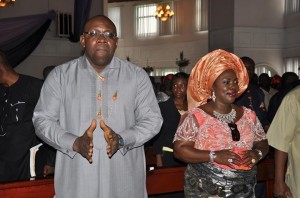 Bayelsa State Governor, Hon. Seriake Dickson has attributed his achievements in life, especially his elevation to the position of a Governor of the state to divine arrangement.

Governor Dickson stated this at a special thanksgiving service at the King of Glory Chapel, Government House, Yenagoa to celebrate God’s faithfulness in his life and that of the state.

Describing his life’s challenges and blessing of God upon him as a testimony of the goodness of the Lord, he urged youths to persevere and have faith in God to achieve success.

Recalling his experiences from childhood to his days in the Nigerian Police and as a lawmaker, the Governor noted that it was divine favour, perseverance and hard work that saw him through the travails of life.

His words, “I want the young people of Bayelsa State to know that I was not overwhelmed by the circumstances I found around me so you too should not give up. And if you work hard, play by the rules and pray hard, remain faithful and loyal to your ideals and to your friends because life is about loyalty, then the sky will be your limit.”

On politics, he described the decisions he took to resign from the Police and the erstwhile government of Dr. Goodluck Jonathan as Attorney General and Commissioner for justice to run for the Federal House of Representatives as not only mysterious, but also served as a stepping stone that culminated to his emergence as Governor.

“And this is why I always tell young people that if anybody tells you that power comes from the East, West, North and South, it is a lie. As I stand here in this sacred alter, I proclaim the majesty of God. My life and what God is using me to do is a testimony that power comes only from God. These feeble knees of mine have never knelt before anybody or thing other than God”

Governor Dickson stressed the need for politicians to play politics with the fear of God and by the set rules as power comes from God alone.

On women, the Governor noted that, his passion for women empowerment is borne out of the supportive role his mother played in his life.

In a sermon, the General Overseer of Royal House of Grace Church, Apostle David Zilly Aggrey underscored the supremacy of God in the affairs of men.

Apostle Aggrey who lauded the Governor for acknowledging the place of God in leadership, reminded those in positions of authority of the need to lead people well.

Also speaking, wife of the Governor, Dr. Rachael Dickson said she sought the face of the Lord during her husband’s trying moments and appreciated God for the honour done them.

The service was well attended by government functionaries and dignitaries from all walks of life including former Governor Diepreye Alamieyeseigha, former and serving members of the national assembly, and the daughter of late Alhaji Moshood Abiola, Hafsat.