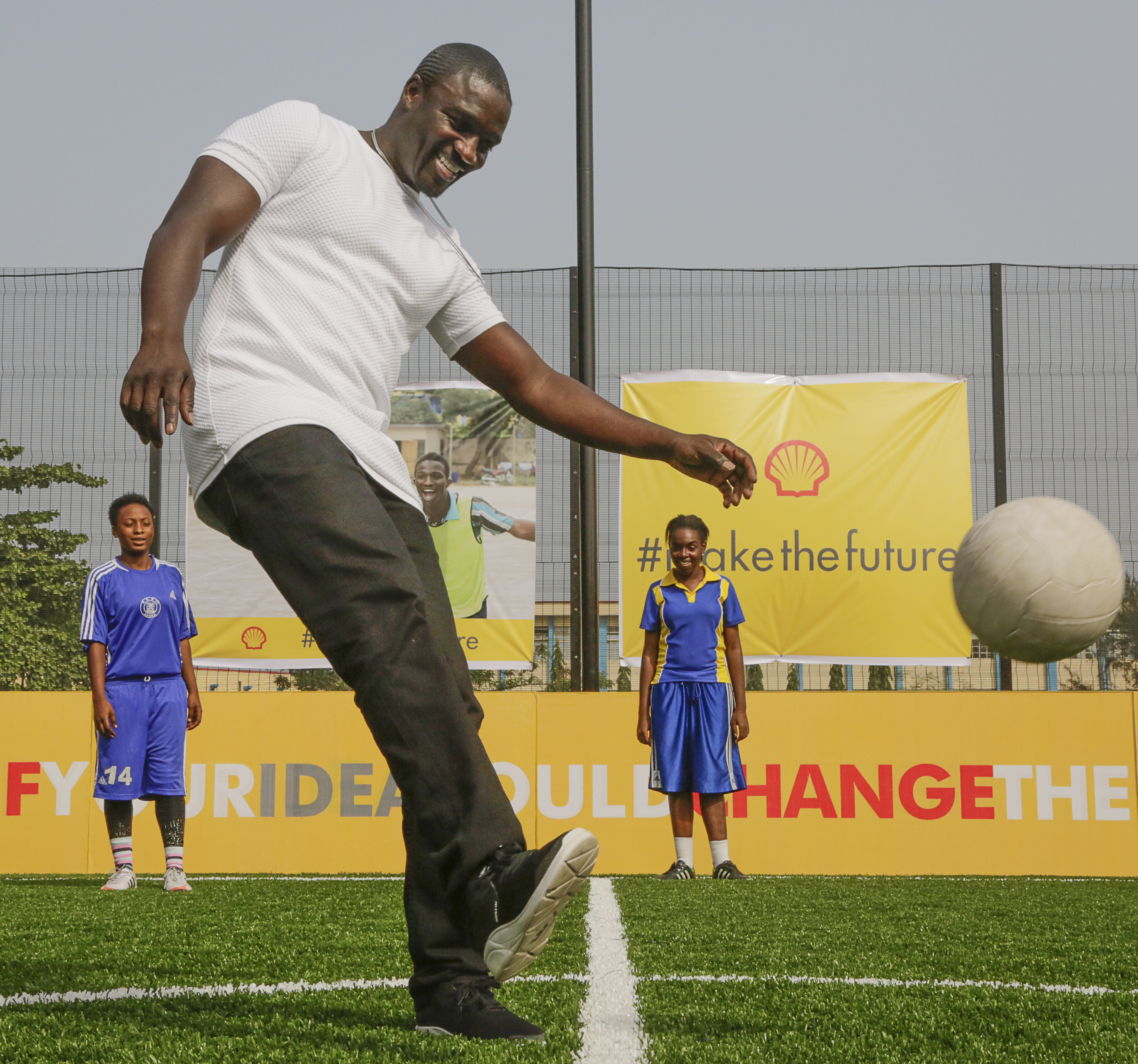 . Pitch to inspire entrepreneurs and bright energy ideas that open up access to energy in Africa and beyond . Akon and Hardwork...

. Pitch to inspire entrepreneurs and bright energy ideas that open up access to energy in Africa and beyond

. Akon and Hardwork debut new song on pitch that will feature in music video celebrating potential of renewable energy 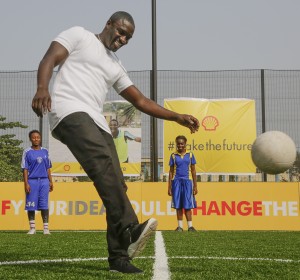 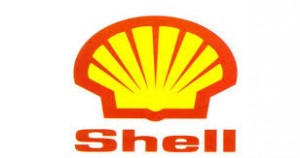 Lagos, Nigeria, 10 December – Global music star Akon joined Shell to shine a light on the power of innovative options for access to smarter energy by unveiling Africa’s first human and solar powered football pitch at the Federal College of Education, Akoka, Lagos. The new pitch is the latest initiative from Shell’s #makethefuture programme, which puts bright energy ideas into action to bring benefits to local communities around the world.

The football pitch was refurbished by Shell using more than 90 underground tiles that capture kinetic energy created by the movement of the players. The tiles are the invention of a young British entrepreneur and founder of Pavegen, Laurence Kemball-Cook, who has been supported through Shell LiveWIRE. The kinetic energy is then stored and combined with power generated by solar panels to operate the new floodlights. This bright energy idea allows the students to play at night and provides a safer and more secure space at the heart of the community.

Music superstar and solar entrepreneur Akon joined Shell to officially open the pitch and continue his commitment to teaching young Africans the importance of harnessing the power of Africa’s renewable energy. The singer is spearheading, through Akon Lighting Africa, a large scale effort to develop solar-powered solutions that will provide African communities with access to clean and affordable sources of electricity. As part of the celebration at the Federal College of Education, Akon and DJ artist Philip “Hardwork” Constable debuted their new song “Tell Me We’re OK” in an exclusive performance on the pitch before its release in 2016. The innovative football pitch will feature in the upcoming music video.

Osagie Okunbor, Country Chair, Shell Companies in Nigeria & Managing Director of The Shell Petroleum Development Company of Nigeria Ltd (SPDC) said, “Shell makes a significant contribution to energy solutions for Nigeria, and we are committed to supporting the Nigerian economy and its people. We need bright energy ideas. Some of these will come from Shell but naturally, others will come from outside our business. So it’s crucial that Shell supports energy entrepreneurs, and we hope that this pitch will inspire more entrepreneurs and young people to help us make a smarter energy future.”

Akon commented, “New, reliable and smarter energy solutions play a major role in driving human progress in Africa. Projects like this innovative football pitch draw attention to the major opportunity that Nigeria as well as the whole of Africa have if we look to better harness new technologies and the continent’s abundant renewable energy resources. That is why Hardwork and I will feature this pitch in our upcoming video for “Tell Me We’re OK” because I want young people, whether they are in Lagos, Los Angeles or London to think about how they too can help us make the future.”

Shell LiveWIRE is an international programme that has been a catalyst for young entrepreneurs to develop enterprising ideas into viable and sustainable businesses for more than 30 years. The LiveWIRE programme was launched in Nigeria in 2003, and since then it has trained more than 6,000 youths in enterprise development and management, of whom more than 3,000 have been provided with business start-up assistance.

Laurence Kemball-Cook, Pavegen founder and CEO and Shell LiveWIRE UK Young Entrepreneur of the Year Finalist in 2011, said, “Our work with Shell has been pivotal to Pavegen’s growth. We got involved with Shell LiveWIRE and Shell Springboard, and both programmes have really helped us transition from a start-up to a small company with a 25-strong staff and global IP. I’m grateful for all the support Shell has given us, and hope we can continue to grow in the smart city future.”

Siji O. Olusanya, Provost of the Federal College of Education, Akoka, added, “We have more than 10,000 student teachers, who will benefit from this innovative solution to light our football pitch. They will be the next generation of teachers across Nigeria and can they use their first-hand experience of this pitch to inspire their pupils that they too can work towards developing bright energy ideas that could make a real difference to their community, Nigeria or even the world. Not only our students but the community that surrounds us will all get to benefit from this pitch for years to come.”

SHELL IN NIGERIA
Shell has a history of over 50 years in Nigeria and the largest footprint of all the international oil and
gas companies operating in the country. Its companies and investments have played a pioneering role in onshore, shallow and deep water oil exploration and production. Shell has also been at the forefront of gas development, producing and delivering gas to domestic consumers and export markets in Nigeria.

Shell businesses in NIGERIA
Shell Companies in Nigeria (SCiN) refers to three separate entities:
The Shell Petroleum Development Company of Nigeria Limited (SPDC)
SPDC is the largest Shell company in Nigeria and produced the country’s first commercial oil exports in 1958. SPDC is the operator of a joint venture (the SPDC JV) between the government-owned Nigerian National Petroleum Corporation – NNPC (55% share), SPDC (30%), Total E&P Nigeria Ltd (10%) and the ENI subsidiary Nigerian Agip Oil Company Limited (5%).
It is focused on onshore and shallow water oil and gas production in the Niger Delta. The SPDC JV’s assets include:
 Around 50 producing oil fields
 A network of approximately 5,000 kilometres of oil and gas pipelines and flow lines
 Five gas plants and two major oil export terminals (Bonny and Forcados)
Shell Nigeria Exploration and Production Company Limited (SNEPCo)
SNEPCo was incorporated in 1993 to develop Nigeria’s deep water oil and gas resources. It is a 100% Shell-owned company and holds interests in four deep water blocks, two of which it operates:
Bonga and Bolia.
SNEPCo also has a 50% interest in the Zabazaba/Etan project operated by Agip and a 44% interest in the Erha project operated by Esso.
 Bonga was Nigeria’s first oil and gas project in water depths over 1,000 metres, and increased Nigeria’s oil capacity by 1 0% when it began producing in 2005.
 Bonga has production capacity of 200,000 barrels of oil per day and 150 million standard cubic feet of gas per day.
Shell Nigeria Gas (SNG)
SNG was incorporated in 1998 to promote gas as a more reliable, cleaner and cost effective alternative to liquid fuels for the Nigerian domestic market. It is a wholly-owned subsidiary of the Shell group.
 It is the first and so far only wholly-owned subsidiary of an international oil company involved in domestic gas distribution in Nigeria.
 SNG operates a gas transmission and distribution network of approximately 115 kilometers.
 The network serves 85 industrial customers in and around the Niger Delta.

LAGOS HUMAN & SOLAR POWERED FOOTBALL PITCH
Shell has built Africa’s first human and solar powered football pitch in Lagos. The pitch is at the Federal College of Education which has a student body of 10,000 who will go on to be the next generation of teachers across Nigeria. The pitch has been built with kinetic tiles developed by the bright minds at Pavegen, a UK energy start-up which has been a recipient of Shell LiveWIRE funding, and was founded by entrepreneur Laurence Kemball-Cook.
The tiles below the pitch capture kinetic energy created by the movement of the players. This energy is then stored and combined with the power generated by solar panels next to the pitch. This is then converted into renewable electricity for the new floodlights, giving the students a guaranteed solution for
playing on the football pitch at night as well as safer and securer community space.
A similar pitch built over a year ago in Rio de Janeiro has had a lasting impact on its community.
Football Pitch Dimensions:
 672.75 square metres, 19.5m x 34.5m
Technical Facts:
 96 tiles have been arranged in 6 rows of 16
 Tile details:
 Length – 600mm
 Width – 450mm
 Height – 56mm
 Weight – 19kg
 The tile’s base uses 80% recycled materials
 The tiles work together with solar panels to power 6 LED floodlights surrounding the pitch
 The tiles, lighting, solar and power management equipment was installed in five days by a team
of six people
 A layer of Astro Turf has been placed on top of a sheet of Glass Reinforced Plastic (GRP) on the
tiles to ensure the look and feel of a football pitch
 Each tile has a drainage channel to manage water flow away from the pitch
 5-year warranty package for all pitch materials and tiles
Solar Panel Specification:
 A single 2 kilowatt peak (kWp) array-roof solar panel, consisting of 8 x 250w Photovoltaic modules
 Solar panel mounted on power management hut alongside football pitch
 25-year linear performance warranty

Shell Global Head of Social and Alternative Media Americo Campos Silva is the Shell Global Head of Social and Alternative Media assumed the position since August 2015, he has held global responsibilities at Shell since 2003 as the Global Fuels Marketing Communications Manager and more recently as the Global Media Manager at Shell International, responsible for all Shell investment in media across all channels and geographies.
His track record of proven success at global, regional and local levels in all areas of Marketing Communications, having worked in Portugal, Brazil, the United Kingdom and Switzerland. Throughout his career, Americo has won multiple marketing and communications industry awards, including several M&M Global Media Awards and the first ever Cannes Lion for Shell in 2015.
Americo is married and has two sons. In his spare time, he is a passionate skier and motorcycle enthusiast.

CEO & Founder, Pavegen Systems Laurence is CEO and Founder of Pavegen Systems – a clean-technology company that generate electricity from footsteps. Since inception in 2009, Pavegen have successfully taken the technology to over 30 countries, with some of the most widely recognised
brands, including: Shell, Adidas, Lexus, SNCF, GDF Suez and Europe’s largest shopping centre, Westfield.
Winner of over 20 awards, including International Social Enterprise Entrepreneur of the Year at the Great British Entrepreneur Awards 2015, Laurence is a renowned thought leader and worldwide speaker on entrepreneurship and innovation.
He is acclaimed by The Guardian for “shifting perceptions of renewable energy.” Having spoken at more TED talks than any other technology company, Laurence’s TEDxBerlin presentation was featured among TED’s top talks on envisioning cities of the future and changing attitudes to fossil fuels. More recent speaking engagements include the United Nations General Assembly and a keynote alongside Apple Founder Steve Wozniak at
DMZ 2.0, Korea.
When Laurence is not running Pavegen he can be found competing in triathlons and Ironman competitions, and tweets @LaurenceKC.