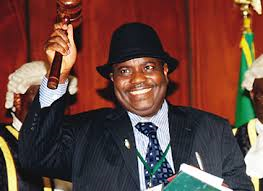 For Tambuwal, a burden of not just calling for, but leading the Nigerian revolution

By Nkem Ekeopara There is nowhere in the world were the English proverb “You can’t eat your cake and have it” ought to become...

There is nowhere in the world were the English proverb “You can’t eat your cake and have it” ought to become a jingle played every second in the public and private electronic media outlets than in Nigeria. This should be so to remind top ranking Nigerian officials of the utter folly inherent in some of their public statements even when they remain a key part of the Nigerian problematic system they duplicitously attack at their convenience.

Also, the quoted English proverb needs to be made into a jingle to be played every second in Nigeria. This should be done to remind the Nigerian populace of the presence of these politicians already bitten by the bug of rapaciousness, but now seemingly seeking for a way to embed themselves within the consciousness of the poverty-stricken Nigerian people to achieve an end. The average Nigerian official wants to have it both ways. And this is quite shameful.

Last week, the Nigerian media was awash with news that the Speaker of Nigeria’s House of Representatives, Hon. Aminu Waziri Tambuwal, described Nigeria as being ripe for a revolution. As it is expected of one living in this age where information is gotten at the touch of a keyboard, upon encountering a statement as weighty as a revolution, the first thing one did was to read the various reports of that news from several sources, and to try and locate the Speaker’s speech. This was necessary to get the kernel of the speech to know the context in which the word was uttered. Regrettably, the extensive efforts made to locate the speech before concluding this article on July 4, 2013 did not yield any result.

However, several of the sources did quote Hon. Tambuwal as having said that, “The most compelling reasons for revolution throughout the ages were injustice, crushing poverty, marginalisation, rampant corruption, lawlessness, joblessness, and general disaffection with the ruling elite. You will agree with me that these describe conditions in our nation now, to a very large degree.” He went on, stressing, “That these conditions exist is well known to all persons in authority but the results of these successive efforts have failed to yield the desired results. This therefore is the justification for the radical change from the present approach to a revolutionary one.”

Hon. Tambuwal spoke on Tuesday July 2, 2013 at the 2013 Distinguished Management Lecture of the Nigerian Institute of Management in Lagos, and was represented by Hon. Opeyemi Bamidele, Chairman, House Committee on Legislative Budget and Research. The lecture whose theme was “The role of the legislature on the economic, infrastructural and ethical revolution in Nigeria,” was reported to have been kick-started with a welcome speech by the President and Chairman of NIM, Chief Michael Olawale-Cole, in which Chief Olawale-Cole stated that more than ever before, Nigeria needed an urgent intellectual revolution to tackle the many leadership challenges besetting her.

As someone who closely monitored the political process in Nigeria from the time the so-called cabal held Nigeria hostage – because of the late Nigerian ruler Alhaji Musa Yar’Adua’s health condition – right through the general elections in 2011 and, as someone who did in fact write commentaries for www.usafricaonline.com at the critical junctures of that era, I do know that Tambuwal is one of the beneficiaries of a much better electoral process when compared to the electoral heist that was superintended by Olusegun Obasanjo’s regime in 2003 and 2007. But for the current Nigerian ruler Dr. Goodluck Jonathan’s mantra of “one man, one vote”, with Dr. Jonathan’s appointment of Professor Attahiru Jega as the Chairman of Independent National Electoral Commission (INEC), and with Jonathan’s refusal to deploy security forces to stand guard while already written results were being declared, as was the case in 2003 and 2007 and, of course, the resolve of the voters to protect their votes, the Peoples Democratic Party (PDP), Tambuwal’s present party, would have won more than the 260 seats it won in 2007 instead of 205 seats it won in 2011.

In other words, if conditions that attended the 2003 and 2007 had prevailed in 2011, the PDP would have won an overwhelming majority. Were that to have been the case, Tambuwal would never have become the Speaker of House of Representatives, knowing PDP’s antecedent of the party’s hierarchy being the ultimate decider of who occupies such seats. This is not to say that the PDP is the only party in Nigeria where the hierarchy undemocratically makes the choice of who occupies which office as we continue to see daily that in parties like Action Congress of Nigeria (ACN), one man, Senator Ahmed Bola Tinubu, does that freely in his party.

The point one is trying to make is that Tambuwal became the Speaker of the House of Representatives due to the support of the opposition members of the House, largely members of the ACN, the South West-rooted party, who did not want the choice of the PDP hierarchy to prevail. Already, the PDP hierarchy had zoned that office to the South West and had actually chosen Mrs. Mulikat Adeola-Akande, who is currently the leader of the House of Representatives, as the person to occupy the position of the Speaker.

Now, one would have expected Tambuwal, on assumption of office, to have persuaded his colleagues to forgo the insane emolument they consume annually from the national budget. If he is the change agent he now implicitly wants us to believe, that’s what he ought to have done. If the House over which he presides had taken the lead, the Senate members would have had no option than to slash their own emolument. If Tambuwal and his colleagues had taken that initiative then, they would have escaped the scandalous revelation in 2012 by the Governor of Central Bank, Mallam Sanusi Lamido Sanusi, that the National Assembly of Nigeria consumes 25% of overhead cost of running the country. On September 20, 2012, The PUNCH even reported that each member of the House as at that time was being paid N27m per quarter as allowances, and the members wanted that sum to be increased to N35m per quarter.

Today, what the jobless Nigerian youths see is legislators returning to their constituencies and handing out motorcycles to the youths to enable the latter operate as cyclists on rural roads, since commercial motorcyclists are banned from operating in most cities. House members share just a little of the large chunk of the national wealth to these youths as though they’re doing the youths a favour, when such resources could be freed to set up cottage industries to absorb these army of unemployed people. Does one need to mention how this sort of action would stem the tide of rural urban migration, provide a less dangerous and more dignifying work to the youths as well as enhance the Nigerian manufacturing capacity? Does one need to say such actions would reduce the rising wave of crimes in Nigeria now, even though the flagrant demonstration of opulence in the Nigerian society lures some of the youths to crime?

If Tambuwal wanted to ‘radically’ change the way things are done in Nigeria, he would have capitalized on the pre-election utterances of many of the opposition members of the House, particularly those from the South West, and put the issue of the so-called fiscal federalism on the front burner. One is disappointed that these ACN members, 69 of them, have never mentioned something supposedly close to the heart of the “progressive” forces in the course of their legislative duties. It shows that the bag of the so-called progressives is filled with nothing but electoral gimmicks. Without doubt, it would have been more credible if Tambuwal was the person who initiated such a move. For anyone to be at one of the high positions and failed to do any of the above, which majority of the Nigerian people desire, makes one wonder what such a person considers to be more “revolutionary” than those? In my opinion, these are the sort of revolutionary legislative acts Tambuwal ought to have been executing or even making attempts to execute to profoundly impact the Nigerian state. My advice to Hon. Tambuwal and his likes is that the revolution they advocate should start with them.