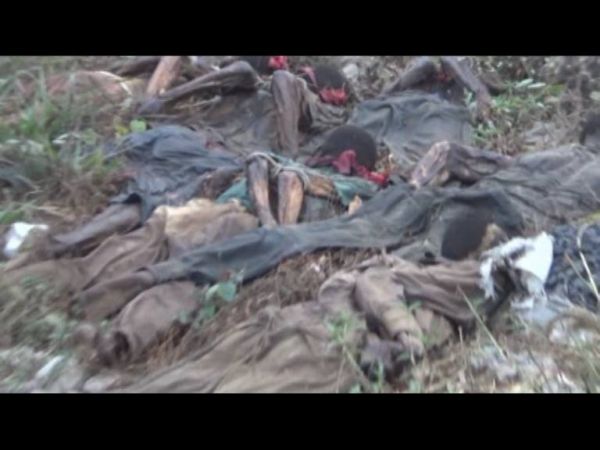 A mass grave of murdered pro-Biafra agitators has been found near the commercial city of Aba, Abia State. Sequel to the gory find confirmed... 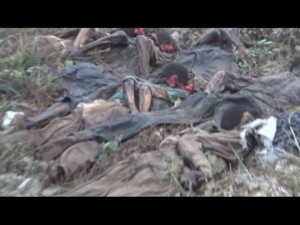 The mass grave of IPOB members as discovered

A mass grave of murdered pro-Biafra agitators has been found near the commercial city of Aba, Abia State.

Sequel to the gory find confirmed by the International Society for Civil Liberties & the Rule of Law (Intersociety) the rights body announced that it dispatched a two-part letter to Nigeria’s Minister of Interior, Abdulrahman Bello Dambazzzau, and Chief of Defence Staff, Major General Abayomi Gabriel Olonisakin calling the attention of Nigerian authorities to the crime.

Intersociety said in the part two of the letter made available on Friday morning (February 19) that it has already visited the mass grave and that Amnesty International has equally done same.

“In the first part of the letter, circulated to the media two days ago, we had peripherally  informed that the soldiers of the 144 Battalion in Ukwa West LGA of Abia State, joined by personnel of the Abia State Police Command and the Finance & Logistics Command of the Nigerian Navy in Owerre-Nta in Abia State had on 9th of February 2016 stormed the premises of the National High School in Aba and opened fire at members of the Indigenous People of Biafra (IPOB) who gathered in their hundreds for the purpose of holding prayer/meeting. The named security forces shot and killed 22 IPOB members and critically injured over 30. The IPOB members had gathered in the school on account of suggestion made to them by the same Abia State Police Command and other security heads during their previous meetings to “restrict their processions, rallies or protests to public places other than streets and roads so as not to attract the attention and violent reactions of the Federal Government”. The first part of the letter of ours under reference is contained in the following link: http://www.thenigerianvoice.com/news/206303/ceaseless-killing-of-unarmed-citizens-in-nigeria-why-securi.html

“We also reported that  among the 22 murdered citizens or IPOB members in the said Aba Prayer/Meeting of 9th of February 2016 were: Uche Friday (30yrs), from Asa in Abia State; Emeka Ekpemandu (35yrs), from Owerre Nkwoji in Imo State; Chiavoghi Chibuikem (Obingwa in Abia State); Nzubechi Onwumere (Orlu in Imo State); Peter Chinemerem Ukasoanya (27yrs), from Isialangwa North in Abia State, Chigozie Cyril Nwoye (23yrs), from Umuna in Ezeagu, Enugu State; Chukwudi Onyekwere (26yrs), from Aboh Mbaise in Imo State; and  Chibuzor Maduagwu (28yrs), from Amauzari in Mbano, Imo State and that the remaining 8 dead bodies of murdered IPOB members and 5 critically injured others at the point of death were taken away by soldiers of 144 Battalion of the Nigerian Army.  The 144 Battalion is commanded by Lt Col Kasim Umar Sidi. The Abia State Police Command had earlier admitted publicly of shooting and killing two IPOB members (“for disturbing students of the National High School in Aba”). The Command is presently and officially in possession of the two dead IPOB members it shot and killed.

“Massacre Of 22 Citizens & Dumping Of 13 Bodies In Borrow Pit: It is our information to Minister of Interior, Retired Gen Bello Abdulrahman Dambazzau, PhD, Chief of Defence Staff, Major General Abayomi Gabriel Olonisakin, members of the international community, international rights and media community and all Nigerians that the combined team of soldiers of the 144 Battalion located in Asa, Ukwa Ngwa West LGA of Abia State under the command of Lt Col Kasim Umar Sidi and the personnel of the Nigeria Police Force, Abia State Command, headed by CP Habila Hosea (08037025670); aided by Aba Area Commander, ACP Peter Nwagbara (08184087787) and joined by personnel of the Nigerian Navy Command (Finance & Logistics Command), Owerre-Nta in Abia State had on 9th of February 2016, shot and killed 22 unarmed, innocent and non violent members of the Indigenous People of Biafra (IPOB) at the National High School along Port Harcourt Road in Aba, Abia State. The security forces had stormed the School on the said date in over ten Hilux vans at about 12: noon.

“Over 30 other members of the IPOB were also shot and critically injured at the scene. Out of the 22 murdered citizens, eight were identified after the shooting and killing spree by other members of the IPOB and sympathisers; some of them died on their way to hospital following excess bleeding and excruciating pains. Two of the 22 murdered IPOB members were taken away by the Abia State Police Command and the remaining 8; alongside 5 critically injured others were packed in two military trucks and taken away by soldiers.

“The IPOB members numbering hundreds had converged peacefully and nonviolently at the National High School for their prayers and meeting. About 30 minutes into their prayer procession in the School’s premises, soldiers of the 144 Battalion, numbering over fifteen; joined by Police and Navy personnel surrounded and barricaded the IPOB members and cordoned off the area. Minutes after, the soldiers opened fire at the IPOB members while Police and Navy personnel joined them by shooting harmful chemical substances at them. Coordinators of the IPOB were before the shooting, fished out and taken away; likewise some married women. Among those earlier arrested and taken away are Abia State IPOB Coordinator, Ikechukwu Ugwuoha, Imo State Coordinator, Amos Ezekiel, Abia State Welfare Officer of IPOB, Okechukwu Nnebedum Nkume, Abia State Zonal Coordinator, Donatus Okeke and one of the principal officers of the group in Rivers State, Joseph Okolie.

“Dumping Of 13 Murdered IPOB Members In Borrow Pit: On Saturday, 13th of February 2016, some scavengers reported to one of the Aba units coordinators of IPOB that they saw some dead bodies in a borrow pit located along Aba Port Harcourt Road. The Borrow Pit was recently converted to a refuse dump by the Government of Abia State. On receiving the report on Saturday morning, the IPOB members moved to the area where they saw 13 dead bodies battered and shrank with decimating chemical substances. The 13 murdered citizens must have included those taken away alive by soldiers who were battered with gunshots. They were laid face down with their eyes tied and covered. Eight of them were dumped together, while another three were dumped separately; likewise the remaining two.

“Shockingly, eight of the gruesomely murdered corpses have their hands tied individually behind their backs with Biafran flags. The “Biafran flags” used in tying them were carefully cut into lengths and ropes made out of them and were used in tying them separately. The flags were parts of items and personal belongings seized and taken away by soldiers at the scene of the bloody shooting on 9th of February 2016 at the National High School in Aba. All the 13 murdered and dumped IPOB members have their hands tied behind their backs and their bodies lacerated with gunshot holes. The chemical substances poured on them shrank and made them look old and taller than their normal heights; all for the purposes of erasing traces and defying easy facial and bodily identifications. Some pathologists and cottage medical experts contacted by Intersociety disclosed that the chemical substances used by killer soldiers of 144 Battalion must have contained a mixture of raw acid and embalmment chemical substances for the purpose of making the corpses shrink, old and odorless.

“Clothes worn by some of the murdered and dumped victims are still new and easily identifiable. The leadership of this organisation (Intersociety) visited the site on Sunday, 14th of February 2016 and saw the gruesomely murdered corpses. The research team of Amnesty International, UK was also on the site on Thursday, 18th of February 2016. The 144 Battalion’s military barracks is located about 10 kilometers away from the Borrow Pit. The murdered citizens must have been dumped in the Pit by the soldiers in the hours of the blue law or after midnight of 9th of February 2016. They were also dumped at a distance away from the refuse site. In the 18th and 29th of January 2015 IPOB peaceful protests in Aba, soldiers also shot dead scores of protesters and took their corpses away. An under-cover video coverage of “the National High School Aba Army Massacre” of 9th of February 2016 extensively exposed how soldiers of the 144 Battalion stormed the premises with Police and Navy personnel, cordoned off and surrendered the IPOB members; opened fire on them, killed 22 and critically injured over 30 and made away with the bodies of those killed as well as those critically injured and married women.”