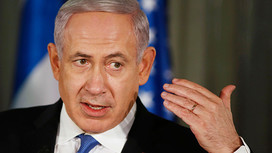 Israel intercepted a rocket near Egypt’s Sinai Peninsula early on Tuesday, exploding it in the air over the southern Israeli city of Eilat, a...

Israel intercepted a rocket near Egypt’s Sinai Peninsula early on Tuesday, exploding it in the air over the southern Israeli city of Eilat, a military official said.

No damage or injury was reported in the incident, but explosions reverberated in the dark skies over the desert hills surrounding the Israeli resort city, where it also set off air raid sirens, witnesses and Israeli news media said.

Israel’s Ynet website said it was the first time Israel’s Iron Dome interceptor had struck a missile fired at Eilat.

The military official declined to say from where the missile had been fired.

Israel briefly shut its airport in Eilat on Thursday citing threats from militants in Sinai involved in a standing confrontation with the Egyptian military.

The violence picked up after former Egyptian President Hosni Mubarak, an ally of Israel, was toppled from power in 2011. It has increased again since last month’s military ouster of Muslim Brotherhood leader Mohamed Mursi as Egypt’s president.

Four Islamist guerrillas in Egypt’s Sinai were killed on Friday by a missile strike that al Qaeda blamed on Israel. Israel dismissed the reports saying it respected Egypt’s sovereignty. Egypt’s armed forces said one of its helicopters had fired the missile to crack down on al Qaeda in Sinai.