Super Falcons in Ghana for AWCON, As FIFA mourns passing of Ajuma Otache

Champions Nigeria flew into Ghana’s capital city, Accra on Wednesday on their way to Cape Coast for Group B attrition of the 11th Women... 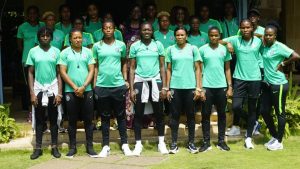 Champions Nigeria flew into Ghana’s capital city, Accra on Wednesday on their way to Cape Coast for Group B attrition of the 11th Women Africa Cup of Nations.

The Super Falcons flew aboard an Emirates Airline flight from Abidjan, where they had camped for the past eight days at the Sol Beni Sports Centre, into the Ghanaian capital before the trip to Cape Coast, where they play South Africa’s Banyana Banyana in the opening match of Group B on Sunday.

A team of 21 players and 12 officials arrived in Cape Coast. Chairman of the Nigeria Women Football League and Member of the NFF Executive Committee, Ms Aisha Falode will join the team on Friday.

Coach Thomas Dennerby is confident the Cup holders will be in the final match scheduled for the Accra Sports Stadium on 1st December.

Meanwhile, the World football governing body, FIFA, has condoled the Nigeria Football Federation over the death at the weekend of former Nigerian international and ex – Flamingoes’ assistant coach, Ajuma Otache.

In a letter personally signed by him and addressed to the President of Nigeria Football Federation Amaju Pinnick, FIFA President Gianni Infantino expressed “deepest sympathy on hearing of the news of the sudden passing of former Nigeria women’s national team player Ajuma Ameh-Otache, one of Nigeria’s most successful women international.

“Throughout her career, she played for Nigeria at the 2004 Olympic Games in Athens and also won the Women’s Africa Cup of Nations the same year in South Africa. She also played for The Super Falcons at the 2003 All Africa Games in Abuja.

“On behalf of the members of the international football community, I should be grateful if you could extend our deepest condolences to her family and loved ones. We would hope that, in some way, our words of support may help bring a little bit of peace and solace in this time of sadness.”