NDDC To Adopt Community Based Management In Sustaining Projects 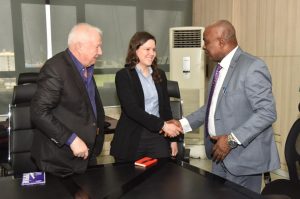 The Director, Community and Rural Development, CRD, of the Niger Delta Development Commission, NDDC, Dr Solomon Ita, welcoming the leader of the European Union delegation, Cecil Collins, at the NDDC headquarters in Port Harcourt.First left is another member of the EU delegation, Mr Robert Achten.

The Niger Delta Development Commission, NDDC, has reaffirmed its commitment to ensure the sustenance of projects executed by the Commission, in the Niger Delta region for the benefit of the people through a community-based management template.

This was stated by the Acting Managing Director of the commission, Prof. Nelson Brambaifa, during a meeting of the Commission’s Focal Task Team (FTT) with delegates of the European Union Niger Delta Support Programme (EU-NDSP), at the NDDC headquarters in Port Harcourt.

The NDDC Chief Executive Officer, who was represented by the Director, Community and Rural Development, CRD, Dr Solomon Ita, commended the EU-backed initiative, stating that the Commission would adopt the community-based management approach to ensure the maintenance of other projects in the region.

He said: “I want to commend this team that has been handling the capacity building of our communities and promoting synergy towards the implementation of Niger Delta pilot project scheme.”

Dr Ita remarked that recently, the Focal Task team had a meeting, which produced an estimated cost of rehabilitating 45 selected water projects across the nine mandate states of the NDDC.

According to him, the NDDC and the European Union would continue to build community-based management that would properly take care of the projects even when the parties had moved to face other areas of intervention.

He added: “We are hoping that this template will be used by the commission and other agencies in implementing and managing some of the abandoned projects we have in the region.”

In her remarks, the Leader of the European Union delegation, Cecil Collins, said that the purpose of the meeting was to review and evaluate the results and the impact of the various interventions, as well as understand the extent they had met the demands of the people, noting that such appraisals would enable the EU do things differently in the future to contribute to the prosperity of the nation and the Niger Delta region.

She said that it was very important to have a feedback on the extent to which the EU’s intervention had complimented efforts made by the Commission in providing portable drinking water in the region.

Meanwhile, the NDDC, has initiated a study to kick-start work on a regional power pool and industrialisation project meant to drive the rapid development of the Niger Delta region using electricity as a catalyst.

The NDDC Acting Managing Director, Prof Nelson Brambaifa, who stated this during a meeting with officials of Income Electrix and a consulting consortium from Germany and Singapore, at the NDDC headquarters in Port Harcourt, said that the Commission was determined to stimulate industrial growth in the Niger Delta region.

Prof Brambaifa, represented by the NDDC Acting Executive Director, Projects, Engr. Dr. Samuel Adjogbe, observed that activities in the Niger Delta region revolved almost exclusively around oil and gas business. “We have looked at some indicators and it is obvious that the power requirement for industrial growth in the region is not available. So, we need to make a deliberate effort to set up projects that can boost power and attract investors to the region,” he said.

The NDDC boss explained that the objective was to create three industrial parks in each of the nine states of the Niger Delta region, adding that the essence of the project was to tap the abundant gas resources in the region for electricity. He said: “Because of the few investors in the region, they are compelled to pay high electricity tariffs. We must begin to pay a more serious attention to power which is a major driver in the economy.”

The Acting Managing Director emphasised that power was the key enabler of economic growth, in the region, stating: “The success of our collective mandate to develop the Niger Delta depends on how much we are able to make the region the hub of socio-economic activities and tourism in Nigeria.”

Prof Brambaifa said the commission was fully focused on diversifying the region’s economy from its over-reliance on oil and gas, stressing the need to make the Niger Delta region an investment destination. He noted that the project had the capacity to provide four million direct jobs because the industrial parks would create a chain of activities in the region.

He affirmed that the power pool project, which was a collaborative effort between the NDDC, the state governments, donor agencies, would help provide adequate power that would be subsidised for the industrial parks.

In his own remarks, the Group Chief Strategy Officer for Income Electrix, Mr. Chima Omeike, re-stated the need to create alternative sources of revenue and create development and investment opportunities in the Niger Delta region.

According to him “electricity is a catalyst that provides the enabling environment for industrial growth. The investments in the power project will aid industrialisation.”

He added: “We have looked at some indicators and it is obvious that the power requirement for industrial growth in the region is not available. So, we need to make deliberate effort to set up projects that can boost power and attract investors to the region.”

Omeike explained that the project would adopt a strategy to harness the cheap, abundant, reliable and available power in the region.

He said further: “The Power Pool Project seeks to fast track the industrialization of the region through the creation of cheap, abundant and reliable power in the Niger Delta region through a strategic public-private and regional electricity market via a regional power pool that is self-regulating, self-sustaining and can also be isolated from the rest of the National grid.

“The proposed regional electricity grid would span nine states – Abia, Akwa-Ibom, Bayelsa, Cross-River, Delta, Edo, Imo, Ondo and Rivers states. The proposed capacity is estimated to be about 7,000 MW linked through a 330KV regional transmission backbone. This regional power pool will then feed industrial parks that would be developed in each of these states with reliable electricity for 24hours every day, at an expected tariff that should be significantly lower than anywhere else in Nigeria for minimum of ten years to drive quick growths.”

A representative of Frost & Sullivan Pte Ltd, the consulting consortium from Singapore, Richard Wong, observed that the Niger Delta had tremendous opportunities to become a major industrial hub in Nigeria. He said that the region had huge energy resources waiting to be fully exploited.

In another development, the NDDC, will soon commence distribution of vaccines, medical and waste management equipment to states in the Niger Delta region.

This was disclosed by the NDDC Acting Director Finance and Administration, EDFA, Dr Chris Amadi, when he led some directors on an inspection visit to the Commission’s warehouses in Port Harcourt.

Dr Amadi, who decried the depreciating state of some of the items in the warehouses, said that the equipment would be put in order for distribution to the appropriate end users. He stated: “I have directed that the waste trucks and medical boats be maintained as soon as possible for subsequent distribution to the various states.”

He explained that the locations where the items were to be distributed had already been compiled and sharing exercise would commence within this month.

In one of the warehouses in Trans Amadi area of Port Harcourt, the Acting Executive Director Finance and Administration inspected solar-powered refrigerators for vaccines which he assured would be distributed to communities in the region as soon as possible.

He said that the Director of Education, Health and Social Services, EHSS, had been mandated to kick start the process for the distribution.

Responding to the directive, an Assistant Director in the EHSS directorate, Dr George Uzornwanne listed some of the supplies procured by the Commission to include, medical waste incinerators, solar-driven refrigerators, vaccines, waste management trucks, agricultural tractors and refuse bins.

He stated that it was the second set of such procurement the commission was distributing in the last two years, noting that those that were procured two years ago were distributed to states ministries of health. He added that they would also be given the new set to help in improving immunization exercises in communities.

Dr Uzornwanne explained that the incinerators would help in combating pollution and infections associated with medical waste disposal in the region. He stated: “We have not had any functional one in the Niger Delta region and we received a lot of requests over the years to procure this essential equipment.”

He said further: “There are two medical ambulances and the EDFA has directed that they be given to the Rivers State Ministry of Health to help the people of the state, especially in the riverine areas that do not have access to immediate health care.”