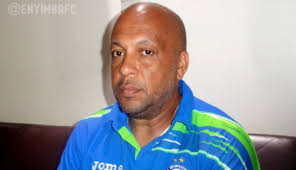 Defender Valentine Ozornwafor – named in the Team of the Tournament at the U20 AFCON finals in Niger Republic in February – and vivacious attacking midfielder Effiom Maxwell are also named in the squad.

Aigbogun spoke to the players over dinner at their Bad Goegging, Germany training camp on Monday where he unveiled the list.

The announcement by Aigbogun comes less than 24 hours before the team tackles Austrian club, Red Bull Salzburg in the Austrian city of Salzburg on Tuesday evening.

The team’s final pre-World Cup friendly will be against Red Bull Leipzig in Germany on Friday, with the delegation detailed to fly out of Germany to Tychy on Sunday.

The Flying Eagles, seven –time champions of the African continent, finished as runners-up at the FIFA World Cup on two occasions – 1989 and 1995 – and took the bronze medals in the former Soviet Union 34 years ago.

Nigeria’s last appearance at the FIFA U20 World Cup was in New Zealand four years ago, where Coach Manu Garba’s wards were eliminated in the Round of 16 by Germany in Christchurch.

The Flying Eagles play Qatar, the United States of America and Ukraine in that order at the championship in Poland, with their first game against Qatar in Tychy on 24th May.