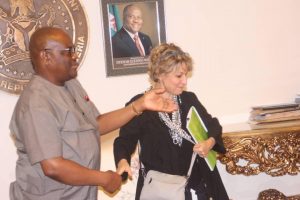 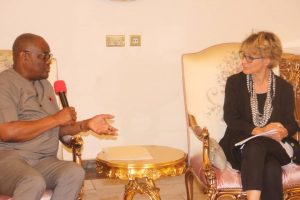 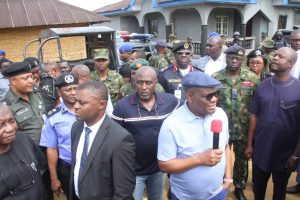 Rivers State Governor, Nyesom Ezenwo Wike (with Microphone)
addressing the people of Kono-Boue and Kereken-Boue Towns in Khana
Local Government Area on Saturday morning when he led Service
Commanders to the area. 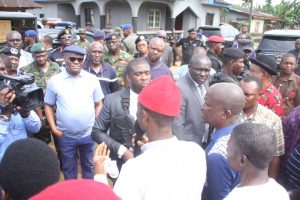 Governor Ezenwo Wike and the people of Kono-Boue and Kereken-Boue Towns in Khana
Local Government Area on Saturday morning when he led Service Commanders to the area.

The Rivers State Governor, Nyesom Ezenwo Wike has alleged that the present security structure in Nigeria makes it difficult  for the Federal Police to respond quickly  to the rising security challenges around the country.

He spoke on Wednesday when he granted  audience to the United Nations Special Rapporteur on Human Rights, Ms. Callamard Agnes, at the Government House, Port Harcourt.

He said: “We believe  that there should be State Police for us to effectively  fight crime in the country.  Our system is fashioned towards the United States, which has Federal, State and Local Police. Each of them have their responsibilities.

“In the present situation, if a crime is committed, the Commissioner of Police will first report to the Inspector General of Police, before taking any action “.
Wike told the UN delegation that the Rivers State Government established the State Neighbourhood Safety Corps Agency to support  security agencies with information, but the agency was frustrated for political reasons.

He said: “We established the Neighbourhood Safety Corps Agency which would have helped the security agencies with Information.  But it was politicised by the Federal Government when they sent the Nigerian Army to ensure that it did not come to fruition.

“If the State Neighbourhood Safety Corps Agency was allowed, probably we would have solved part of the security problems”.

Speaking further, Governor Wike said that if the Amended Electoral Act had been assented to by the President, Electoral Violence  would have been reduced to the barest minimum, as there wouldn’t have been any incentive  to snatch  materials and manipulate the Electoral Process.

He berated the Nigerian Army for perpetuating violence during the 2019 General Elections in Rivers State.  He said the negative actions of the Army was such that several embassies were shocked.

He said that working with security agencies, the State Government has intervened in the cult clashes in Ogoniland.  He said several arrests have been made in Khana Local Government Area, where cult groups dislodged some communities.

Earlier, the United Nations  Special Rapporteur on Human Rights ,  Ms. Callamard Agnes said that she is interested in documenting the nature and extent of killings by State and Non-State actors.

She said: “I am interested on how the Federal and State Governments respond to the challenges of violence by State and non-state actors.

“I would be grateful if you will share with us, Information on killings by the State and Non-state actors “.

Meanwhile, Governor Wike has declared that the State Security Council will deploy more security personnel to troubled Ogoni communities with a view to restoring peace.

Speaking on Saturday when he led the State Security Service Commanders to Kono-Boue and Kereken-Boue Towns in Khana Local Government Area, Governor Wike said that the security agencies have been mobilised to go after the criminal cultists operating in parts of Ogoniland.

He said: “We will do everything possible to make sure that those involved in these criminal cult activities don’t go free… You have to cooperate with us to get the killers. Those who have perpetrated these crimes are known to community members. No armed robber operates in a place without local support . Therefore, support us with credible information. I feel so sad that these cultists have killed our people and displaced some communities in the area. We have taken measures to restore peace “, he said.

He further stated that the State Security Council has adopted new strategies to build the security framework in communities troubled by cultists: “Tell your people to come back. I have come here with the security service Commanders to reassure you that we are doing everything possible to restore peace.”

Governor Wike charged parents to monitor their children adding that communities must take measures to discourage youths from becoming cultists. The Governor noted that the State Government will support displaced communities and families of victims of the cult-related attacks in Ogoniland. He assured the leaders of the area that the Rivers State Government will complete the road abandoned by the Niger Delta Development Commission.

Speaking also, the Chairman of Khana Local Government Area, Mr Lahteh Loolo explained that cultists displaced some communities in the area and commended the Rivers State Governor for his sustained response which reduced the level of casualties suffered by the communities. He said that with the new strategies introduced by the Rivers State Governor, the security challenge facing the area would be resolved.

The Traditional Ruler of Kono Boue, Chief Ezekiel Manson expressed happiness with the intervention of the Rivers State Governor. He said when the cultists attacked the community, the divisional Police Officer and his personnel responded positively. He said there are no cultists among those who were killed and displaced in the community.