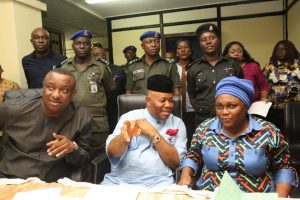 1. The Minister of Niger Delta Affairs, Senator Godswill Akpabio,(middle) share jokes with the NDDC Acting Managing Director, Dr Akwagaga Lelegima Enyia (right) and the Minister of State, Mr. Festus Keyamo, during an interactive session with NDDC management and staff during a working visit to the Commission’s headquarters in Port Harcourt. 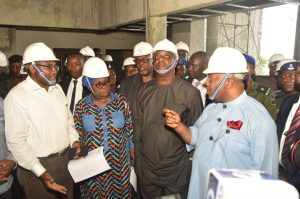 Akpabio, who addressed NDDC management and staff during a working visit to the Commission’s headquarters in Port Harcourt, said that the success story of the partnership should serve as a challenge to other International Oil Companies, IOCs.

Akpabio’s entourage, which included the Minister of State, Mr. Festus Keyamo and directors of his ministry, also inspected on-going construction of the 13-floor permanent headquarters of the NDDC and a failed section of the East-West Road at Nkpolu area of Port Harcourt.

The NDDC Acting Managing Director, Dr Akwagaga Lelegima Enyia and other directors of the Commission took the ministers round during the inspections, where Akpabio directed that the Commission must move to its permanent headquarters by March next year. “NDDC will no longer pay rent for its headquarters from next year,” he declared.

The Minister announced plans to start a Post Amnesty Initiative, PAI, where industrial clusters would be established across the region to engage youths who graduate from the current Amnesty Programme of the Federal Government. He noted that the programme would end someday and the youths may be forced to fall back on the NDDC.

According to him: “All the nine Niger Delta states will have the industrial clusters that can absorb between 1,000 and 2,000 youths with different skills. We are going to provide for this in the 2020 budget of the NDDC. The Ministry and the Commission will collaborate to realize this goal.”

Akpabio stated that the mission of his Ministry and that of the NDDC were similar and that had made it necessary for them to work with one accord. He explained: “We are now united to ensure effective coordination of the development strides of this region. In fact, it is now rapid movement to the next level. Mr. President has placed the supervision of the NDDC under the palms of the Minister of Niger Delta Affairs. That is why we are here now to work together. We are now in a marriage.”

The minister noted that the marriage needed to chart a new course for the people of the Niger Delta region, stating: “We have to be very frank with ourselves. There is a general consensus that the NDDC could have done better than what it has done in the past. So, we have to work together to ensure that NDDC lives up to the expectations of our people. But even if we say that NDDC has not met our expectations, it does not mean that it has not made significant progress. It has contributed a lot to the peace in the region.

He added: “We must partner with him and pray for more because we deserve more. The Federal Government still has obligations under the law to remit some money to NDDC. I will fight for the money to come to you.”

The Minister said that NDDC must drastically curtail its procurement activities by reducing the number of new projects and programmes. “As at today, the NDDC has 12,000 on-going projects and many of them are experiencing funding challenges,” he remarked.

Akpabio charged the NDDC to prioritize signature projects in each of the nine states of the Niger Delta, stressing that these projects should be funded properly, monitored and supervised closely to ensure prompt delivery, so that NDDC would have legacy projects in the region.

Earlier in her address, Dr Enyia said that the NDDC had placed itself on a mission that was in sync with that of the Niger Delta Ministry. This, she said, was anchored on a new narrative that every Kobo expended by the Commission whether on execution of a project or provision of services, must count.

She affirmed: “We have begun a self-auditing process where everyone interrogates their integrity quotient in the light of the sad stereotype into which the Commission has been cast. So, we have set out to build a new image based on a culture of service delivery devoid of corrupt practices. In line with good conscience and your charge, I have challenged Directors and the general staff that the Commission’s daily businesses must be transacted with no modicum of corruptive complicity.”

The NDDC Chief Executive Officer said that serious efforts were being made to complete the Commission’s headquarters building. She noted: “Specifics of our actions in that regard include engaging the lead contractor in a bare-it-all dialogue to extract commitments of expedited delivery while not impugning quality. Both parties worked out a mutually, robust work and delivery plan that will be accommodated within an acceptable deadline.

Dr Enyia told the ministers that under three weeks, the NDDC had extended its frontiers in the desire to cut poverty by half and transform Niger Delta rural communities.

She said: “We have held discussions followed with Technical Committee Sessions with teams from the Federal Ministries of Finance and Agriculture, and the International Fund for Agricultural Development, IFAD. We are driving a partnership to grow agribusiness in the focal states of the Commission that will target about 10 local government areas in each state. The programme, ‘Livelihood Improvement Family Enterprises Project in the Niger Delta, LIFE-ND’, is bringing about $129.2m on the table.”