Rivers State Governor, Nyesom Wike, has decried the faulty electoral system in the last 20 years of Nigeria’s democracy, declaring that such is responsible... 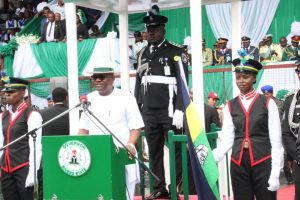 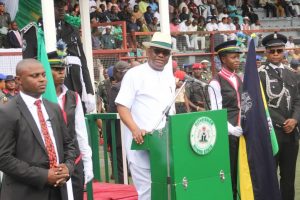 Rivers State Governor, Nyesom Wike, has decried the faulty electoral system in the last 20 years of Nigeria’s democracy, declaring that such is responsible for the poor leadership selection process.
Addressing Rivers people during the 59th Independence Anniversary at the Sharks Stadium in Port Harcourt on Tuesday, Governor Wike noted that the Electoral System has been largely fraudulent, making it difficult for votes to count.
He said: “We pride ourselves as a democratic nation, yet for 20years, our electoral process has remained widely fraudulent and incapable of delivering free and fair elections.
“Yet, we are shamefully carrying on as if all is well, resisting every attempt at providing a credible electoral system, and not minding the monumental damage this has caused and continues to cause to the character and quality of our politics, leadership recruitment and nation building.”
Governor Wike said that this year’s Anniversary of the country represents 59 years of mixed results. According to the Rivers State Governor, there are areas where the country has made significant progress, while in others it has failed woefully.
“By all accounts, it has been 59 years of mixed results; making significant strides in some respect and failing woefully in some others. Nevertheless, we have reason to celebrate this day because we have been free and will remain a free and sovereign nation forever,” he said.
Governor Wike said that National Unity, social cohesion, good governance and improved standard of living motivated Nigerians to seek Independence.
He said: “But today, it is more like 59 years of wasted dreams, mismanaged opportunities and hope deferred for our country and our people as disunity, mutual mistrust, intolerance, hatred and violence continue to corrode the fragile walls that feebly bind the nation.
“Years and years of bad governance, endemic corruption and mismanagement have ruined our economy, ridden it with huge foreign and local debts”.
He said much as the Federal Government may pretend, it is evident that things are spiralling out of control for Nigeria. The Governor said nobody can truly see a way forward due to failed policies and lack of vision at the Federal Level.
The Rivers State Governor noted that though the economic situation of the country may be bad, nation building remains a work in progress.
“Today offers us another opportunity to keep hope alive by standing with each other, United by a common desire to build a better, resourceful and politically vibrant, fair and peaceful Nigeria with great economic opportunities, security and improved wellbeing for all “, he said.
Governor Wike suggested: ” that the nation should embrace a political and economic system that recognises the sovereignty of the component units over their natural resources coupled with a credible Electoral system to produce the right leadership culture “.
He said that Rivers State remains a leading State of the country that contributes to the financial stability and development of the country.
The Governor noted that under his leadership, the Rivers State Government has promoted good governance for the development, security and empowerment of Rivers people.
“We have strengthened the institutions of governance, including the State’s judiciary and legislature and ensured respect for the rule of law, human rights and dignity and prudence, accountability and effectiveness in public resource utilisation and service delivery.

“We have embraced e-governance with the digitalisation of services to our people in some government departments.
We are taking significant steps to tackle criminality and keep Rivers State safe and secure.

“Last month we launched the special security operations code named “Operation Sting” against banditry, cultism and kidnapping across the State. Happily, the security situation has greatly improved in the last two months, thanks to the determination and efforts of the security forces to smoke and flush the criminals out of our State.
“Recognising the importance of infrastructure for accelerated economic growth and development, we have invested heavily in the provision of infrastructure leading to the construction and reconstruction of new and existing roads and bridges across the State, including roads in rural areas of the State,” he said.
He assured that all the ongoing roads and proposed three flyover bridges would be completed before the end of the second term.
He outlined the successes recorded by his Administration in the education, infrastructure, health, security and sports sectors.
He announced the directive to the State Ministries of Education and Sports for the commencement of the annual school and youth sports festival to harness fresh sports talents.
Wike said the acquisition of 45 percent Shell interest in Oil Mining Lease (OML) 11 by the State Government was a step towards developing the state’s development.