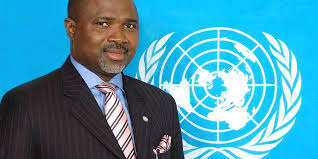 African lawyers have been charged to leverage on their exclusive control of the judicial arms of their governments to enforce and advance the cause...

African lawyers have been charged to leverage on their exclusive control of the judicial arms of their governments to enforce and advance the cause of justice, human rights and overall development in the continent.

Making the call while giving the opening remarks at the just ended conference of African Bar Association in Monrovia, Liberia, the United Nations, Office of the High Commissioner for Human Rights (OHCHR) Representative in Liberia, Dr. Uchenna Emelonye regretted that despite their exclusive control of the judiciary, African lawyers have not been seen doing enough to bring the positive social change that such opportunity of exclusive control of an arm of government provided. The four-day conference organized for all member lawyers in Africa, had its theme as: “Tackling Contemporary Issues Facing The African Continent: How Lawyers Can Drive A Renaissance”.

The top diplomat and jurist therefore urged African lawyers to make amends and help reposition Africa through the strict enforcement of human rights and the laws of their countries.

His words: “The theme of the conference, if we dissect it, would give us the understanding that lawyers have a great role to play in the renaissance and to do this, I need to remind that there are more lawyers in governance than any other profession. Out of the three arms of government, the lawyers exclusively control the judiciary. The lawyers numerically are higher in the legislature and most times higher in the executive arm. So, today I urge my colleagues, being a lawyer myself, for us to internalize that we may have failed the people we are supposed to protect. The judiciary stands out in the hierarchy of the three arms of government and is the last bastion of the common man. There is a reason for that. The reason for that, is a vote of confidence that lawyers will be able to protect the citizenry when it matters most. I wonder today whether we can stand to that creed that we defined when it matters most. I therefore urge that this conference come to a resolution that African lawyers have failed in protecting, promoting and supporting good governance in this continent”

He continued: “This conference calls for what lawyers can do in tackling contemporary issues facing the African continent. Lawyers can do a lot and should do better. Let me give you three issues that lawyers can do more effectively in addressing contemporary challenges. The first one is the issue of corruption, and lawyers can do immensely here. There are casualties arising from corruption in the continent more than casualties arising from the guns. The international human right system gives countries and regions the possibility of redefining human right issues based on their contemporaries and I will urge that Africa look at corruption and elevate it based on its impact to crime against humanity. Lawyers can help in ensuring the entrenchment of human rights in this continent”.

The UN Human Rights envoy further frowned at the fact that Africans are still made by the continent’s leaders to continue to yearn for human rights and privileges taken for granted in other parts of the world:

“Today, we are struggling as a continent with the enjoyment of economic, social and cultural rights. As a continent, we are still unable to overcome preventable maternal deaths, we are still dependent on donors for immunizations and we know very well that the cost of immunization is affordable if African leaders prioritize it not merely as health service delivery, but most importantly as means of enjoying the right to life”. Finally, my vision: Today, Africans are dying in the Mediterranean and we are allowing other people to shape the narrative. The narrative is not immigration, the narrative is not irregular migration, the true narrative is that the death of Africans in the Mediterranean and other places in the bid to migrate to ‘safe havens’ is a vote of no confidence on bad governance in their respective countries”.

“Our brothers and sisters are willing to die in the Mediterranean and other places because they do not have a refuge in their home countries. They are willing to take dangerous sojourns because it is even more dangerous to subsist in their own countries. If an enabling environment is created by African leaders with the resources at their disposal, if the limited resources of the continent are sensibly exploited and equitably distributed to the citizenry regardless of caste and creed, Africans will safely remain in the continent and those who choose to migrate, will do that safely and legally. I hereby call on the African Bar Association to advance its advocacy and hold African leaders accountable for bad governance and for why our people die in the Mediterranean.”