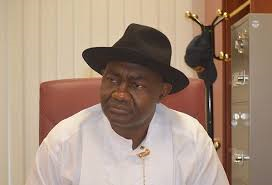 From Dianabasi Effiong Sen. Magnus Abe, former Senator representing Rivers South-East in the National Assembly, has appealed to those calling for the removal of...

Sen. Magnus Abe, former Senator representing Rivers South-East in the National Assembly, has appealed to those calling for the removal of Sen. Godswill Akpabio, the Minister, Niger Delta Affairs (MNDA), to tread with caution.

He made the call on Tuesday in Port Harcourt while speaking with some journalists in reaction to demands by some Nigerians for the removal of the MNDA, Sen. Godswill Akpabio. Abe also told the journalists that there is no crisis in the Niger Delta Development Commission (NDDC).

According to Abe, those calling for the sack of the Minister of Niger Delta Affairs should rather consider the interest of the Nigeria Delta Region as paramount.

He said: “Honestly, I do not see any battle in the NDDC; a lot of these battles are on the pages of newspapers. As far as I know, everybody that has turned up at the NDDC turned up on the instructions of the President.

“That is the person constitutionally mandated to appoint people into NDDC. If he has appointed anybody as acting or interim or whatever, we have been giving them support. So, to all those who are calling for the sack of Senator Godswill Akpabio, I want to advise them, in the interest of the Niger Delta, let us not behave in a manner that people in this country will think that we don’t know what we are doing.’’

According to Abe, the crisis in All Progressives Congress (APC) in Rivers has its origin “in the unconstitutional decision of the leader of the party in the state Rt Hon Chibuike Amaechi to summarily expel me”.

He also alleged that the crisis also emanated from Amaechi’s decision to “summarily expel other leaders of the party in the state seen as sympathetic to my governorship ambition for no discernible reason”.

The senator also said that the personal relationship he had with Gov. Nyesom Wike of Rivers, ruptured when they went their separate ways politically.

He also disclosed that instituted a suit against some media houses over some libelous publications against his person.

Abe said: “I was painted to the Nigerian public as a desperate politician who destroyed his party because of his personal ambition. My integrity and my reputation remain my most valuable assets, if I lose that to the politics of hate and deceit then I would have lost everything.”