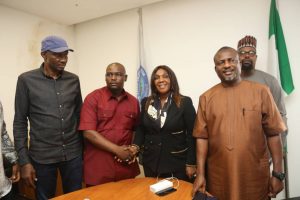 The Acting Managing Director of the Niger Delta Development Commission, NDDC, Gbene Dr Joi Nunieh, has charged former agitators in the Niger Delta to join the campaign to promote a safe and clean Niger Delta region.

Dr Nunieh made the call yesterday when a group of ex-agitators from the oil-rich region paid her a courtesy visit at the NDDC headquarters in Port Harcourt.

Nunieh said: “We have a duty to clean up the Niger Delta and make it safe for investors.  With a clean and peaceful environment, investors will be willing to bring businesses to the region.”

She urged Niger Delta stakeholders to support the efforts of the Federal Government to clean up the polluted environment in the region, assuring that NDDC would encourage the various communities to keep their villages and beaches clean.

She declared:  “The NDDC will institute a prize for the cleanest village in the Niger Delta. We need to provide safe drinking water for our people.”

Nunieh said it was important for all communities in the Niger Delta to be part of the movement to take the region to the next level, assuring that President Muhammadu Buhari was determined to touch the lives of the people at the grassroots.

Speaking earlier, the leader of the ex-agitators group, Comrade Jinjiri Elenwo, said that the coming of the Interim Management Committee, IMC, had brought changes to the NDDC and rekindled the hope of the people of the Niger Delta.

Elenwo promised that the ex-agitators would key into the clean-up campaign initiated by the new leadership at the NDDC.