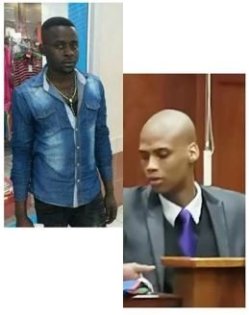 The South African Police Constable, Austin Reynold, who robbed and killed a Nigerian, Emeka Okoli, was on Monday sentenced to 32 years in prison... 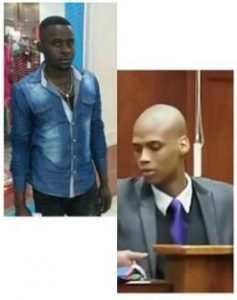 Left, the victim and Right, the killer cop, Reynold

The South African Police Constable, Austin Reynold, who robbed and killed a Nigerian, Emeka Okoli, was on Monday sentenced to 32 years in prison by a Durban High Court.

The News Agency of Nigeria (NAN) reports the court sentenced the policeman three days after he was found guilty of robbing and killing the late Okoli during an illegal raid in the community where the deceased resided.

The court sentenced Reynold to seven years for counts of robbery and 25 years for the count of murder.

Reacting to the judgment by Justice Shyam Gyanda, the Nigerian community in South Africa welcomed the sentencing/jailing of the South African police officer who shot at close range and killed Okoli.

He was reported to have killed the Nigerian of Anambra extraction on Jan. 18, 2018.

“We were at the scene of the murder on Jan. 19, 2018 to ensure that our people didn’t take the law in their own hands,’’ NUSA President, Adetola Olubajo said in a statement.

“We later ensured that a murder case was registered at Durban Police Station and the case was charged to court immediately due to the cooperation of the investigating officer at Independent Police Investigative Directorate (IPDI).

“I led a delegation of the National Executive of Nigerian Union South Africa from Pretoria to Durban Magistrates’ Court on Jan. 21, 2018 where the bail application was heard.

“And since then we have been following the case, attending the trial with the head of our Legal Desk.’’

He said that the colleague of Reynold, Brinley Pallo, who was with him when he shot and killed Okoli later turned state witness.

“We are delighted and welcomed the outcome of the trial because our labour did not go in vain and this case will serve as deterrent to rogue elements within the South African Police Service.

“We give special thanks to Mr Omoreige Ogboro, the Legal Adviser of the union, who travelled from Pretoria to Durban on several occasions to watch the brief in court.

“Also, to IPID for their cooperation. NUSA is also keenly following and attending the trial of eight police officers charged with murder of the late Badmus Olalekan Ibrahim.

“The trial was postponed to April 13, 2020. We are very optimistic that justice will be served in the murder case of Ibrahim and we call on all Nigerians in South Africa to remain law abiding,’’ Olubajo said. (NAN)