Governor  Nyesom Wike of Rivers State has called on Traditional Rulers from the South-South to work in unity to advance the development of the... 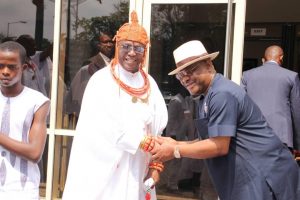 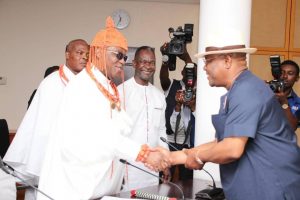 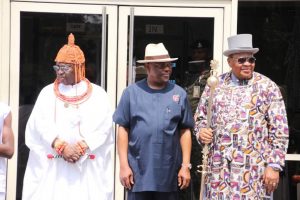 Governor  Nyesom Wike of Rivers State has called on Traditional Rulers from the South-South to work in unity to advance the development of the political zone.

He made the call on Tuesday in Government House, Port Harcourt when he hosted the Oba of Benin, Omo N’Oba N’Edo,Akpolokpolo, Ewuare II, who was on a courtesy visit.

He said: “The Traditional Rulers from South-South should work together to advance the development of the region.

“The Oba of Benin and the Amanyanabo of Opobo Kingdom should not be second class to anyone.  Our Traditional Rulers must not be relegated by anyone.  We should not see ourselves as second class citizens.”

Governor Wike urged leaders of the South-South to stop the situation where militants determine who becomes the Traditional Rulers.

“Militants should never dictate what happens in communities. I am talking about Traditional Leadership.

“These days,  you see people of no consequence coming forward to determine who becomes a Traditional Ruler because they carry guns. We must perform our roles and functions “, he said.

Governor Wike called on South-South Traditional Rulers to work with the Governors of the zone to chart out areas that require developmental interventions.

He said: “When we interact,  you point out areas where you require the governors to develop and we can synergise for the good of the zone.

The Governor called on the Oba of Benin to find a way to resolve the political feud among two leaders of Edo State.

“I want to humbly call on you to wade into the political crisis in Edo State.Though you are not a politician,  it is necessary for the feud  to be resolved.  Please find a way to address the issue,” Wike said.

Earlier,the Oba of Benin, His Royal Majesty, Omo N’Oba N’Edo, Uku Akpolokpolo, Ewuare II said that his visit to Port Harcourt was in line with the tradition established by his late father.

He said: “Following the footstep of my father who came on a thank you tour after his coronation,  particularly when we recall with nostalgia my father’s public service in Ahoada many years ago.  Port Harcourt and Rivers State is indeed a second home.”

Oba of Benin said his visit is aimed at strengthening friendly and close relationships between the people.

“I am here to strengthen the friendly relationship and close affinity of our people.  History has it that some of the tribes here trace their ancestry to Benin. This includes the Ikwerres, the people of Ahoada and Omoku, ” he said.

He added that he was also in the State to meet with other Traditional Rulers to influence the process of development.

He said: “I will meet with the South-South Monarchs Forum who were present at the coronation so that we can share ideas with them on ways of strengthening the Traditional Institution in Nigeria and ensure the development and well being of our people.

He extended a Special Invitation to the Government and people of Rivers State to participate in the celebration of the Igue Festival and receive the blessing of doing so.

He informed the Rivers State Governor that the Managing Director of Access Bank,  Mr Herbert Wigwe has made quality investments at the Benin Palace.