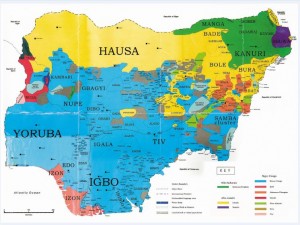 In Security/Defence, Northern Muslims occupy –
1. President and Commander-in-Chief
2. Minister of Defence
3. NSA
4. DG DSS
5. Chief of Army Staff
6. Chief of Air Staff
7. IGP
8. CG Immigration
9. CG Prisons
10. Chair EFCC
Yet the insecurity in the North is just crazy. Scores are killed every other day and there’s simply no end in sight. Kidnapping has also become the norm as highways have become bandit baits.

Even in education, Northern Muslims control the major agencies –
1. Minister of Education
2. Exec Sec UBEC
3. Exec Sec TETFUND (Northern Christian though)
4. Exec Sec NUC
5. VC NOUN
6. Exec. Sec NTI
7. Exec. Sec NCCE
Yet the illiteracy in the North is undefinable. 69% of children without access to basic education in Nigeria are in the North. About 10m are out of school children.

Conclusion? This is the shape of today’s govt and the corresponding negative value on the side of the masses show that the Northern elite want power for nothing else other than their personal aggrandizement,to feed themselves and their their large families. Now you can understand the extreme hysteria with which they attacked Jonathan’s govt.

Life outside political power seem unbearable for the Northern elite. However, not even their own people benefit from this hold on political power which they have had for the better part of Nigeria’s independence so when we say ‘The North is this or that’, let us bear in mind that it is just a microscopic few that are lording it over the millions in their typical feudal culture. When Emir Sanusi says Northern elite have failed the North, he is on point even though he is part of those he criticizes..

I have never ceased being amazed at how this elite get these millions of people to fall in line. In a manner of speaking, I am some-Northerner myself but I’ve never gotten used to seeing how so few can control so many so effectively. This must be the greatest religious hypnosis ever. Oh yeah, religion (or their interpretation of it) plays a GREAT part in this subjugation and impoverishment of the Northern masses by their ruling elite.

But when will these millions ever awaken to take their own destiny in their hands seeing that political power is NOT in their interest? Will they ever? With all the huge potential, why is so little received by the majority in a country where their elite control all resources of state? Surely that’s against the run of nature, isn’t it?

Why the focus on the North? Very simple. Look at the electoral figures, the North holds the influencing numbers in a nation where power is concentrated at the center. We can quarrel with the authenticity or propriety of this (of course I do!) but the reality is that those numbers are backed by force of state and except you have the resources to overthrow the state, there’s no need arguing that. So where does that leave us?

The North, by a disaster of its leadership, is dragging Nigeria backwards and holding down the advancement of other regions who want to make rapid progress. If nothing is done about this, you leave other regions no choice but to opt out of the unequal yoke. Simple as that.

Caveat: I am NOT responsible for how you interpret this. I take responsibility for my words only. Thank you.