•urges them to work with state government to check Coronavirus Rivers State Governor, Nyesom Ezenwo Wike has appealed to religious leaders in the state... 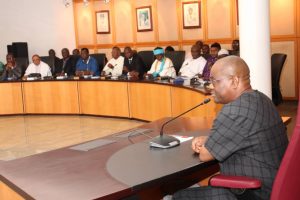 Gov. Wike at the meeting with the religious leaders

•urges them to work with state government to check Coronavirus

Rivers State Governor, Nyesom Ezenwo Wike has appealed to religious leaders in the state to cooperate with his administration to enforce precautionary measures to stop the spread of coronavirus.

He said “This is a trying period. The State Government owes the society a responsibility to protect lives and property.

“This is an interface to inform you of the measures that the State Government is taking.”

He urged the Churches and Muslims to ensure social distancing of about 50 persons who  worship at a particular time.

The Governor advised all religious groups to spread out their worship time to admit fewer people per time.

Governor Wike informed the religious leaders that his administration has set up surveillance teams to test all people coming into the state.

He said, “Health issue is vey. Nobody should trivialize health issues.”

The Governor said that only government directive will apply in the state at this time.

He said that markets are yet to be shut down due to the current economic situation.

Responding, Anglican Bishop of Evo Diocese, Rt. Rev. Innocent Ordu said that clerics have been directed to restrict attendance of church services to check the spread of coronavirus.

Regional pastor of Redeemed Christian church of God, Pastor Kale Obunge said that the church has already taken measures to restrict the numbers of worshippers in the churches.

A Catholic Priest, Mognr Pius Kii informed the Governor that the church is already working to stop huge numbers in any church service.

Apostle Zilly Aggrey, said steps should be taken on the issue of lock down of cities.

Also speaking,  Imam Idris of Rumuolumeni Mosque assured the Rivers State Governor that Muslims in the state will comply with the directive of the State Government.