By Fidelis Egugbo In a few months, Delta will be celebrating 29 years of its creation. The geographical area, Delta State as we know... 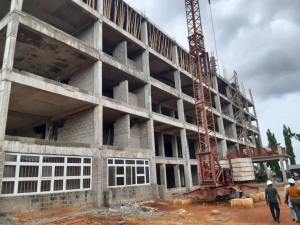 In a few months, Delta will be celebrating 29 years of its creation. The geographical area, Delta State as we know it today, is a culmination of political and historical events, including a succession of governments, that shaped the entity over the years partly under the defunct Western Region, Midwest, Bendel in post-independence Nigeria. Interestingly, a historical monument, the Mungo Park building in Asaba also attests to the fact that the ancient city of Asaba, which is today, Delta’s capital, was at a time the administrative headquarters of pre-colonial Nigeria.However, one question that many may not readily provide answer is, if Asaba for more than a century has played key roles in political administration of the country, how come the city lacks accommodation for government’s Ministries, Departments and Agencies (MDAs)?

Yes! On August 27, 1991, Asaba became the capital of the foremost oil producing state in Nigeria. Ironically, most of the government’s agencies are quartered in private residences which, in no mean measures, has adversely affected the functionality of government.

Governor of Delta, Senator (Dr.) Ifeanyi Okowa, as a former commissioner and Secretary to the State Government (SSG), no doubt, is fully aware that there cannot be effective governance with government offices scattered in all parts of the capital city, some of them in very obscure and inaccessible locations, such that it sometimes require several phone calls to get a proper direction. Therefore, he dared to build a one-stop secretariat complex that will house all the state’s MDAs and, of course, bring about more dignity to governance. Dignity? Yes indeed! If you visit offices of some top government functionaries, you would weep at the confined space where they stay to take decisions to ensure that things move smoothly in the state. But, with the new secretariat complex, no doubt, they will be more comfortable in rendering services to the people.

When I used the word ‘dare’ for Governor Okowa’s intervention in building a secretariat to house all MDAs, I mean DARE because there is no doubt that with a truly functional secretariat most of those who fleece money from government in the name of rent will be out of business. As a matter of fact, it takes one who knows how scattered across Asaba the MDAs are to appreciate what government pays as rent every year.

So, will it be possible for the secretariat to function? Won’t the beneficiaries of the current situation thwart the move?

These questions prompted my recent visit to the Ministry of Housing, where I met the commissioner in charge of the ministry, Chief Festus Ochonogor. Knowing the antecedents of Chief Ochonogor, I was confident of meeting him in the office unless he was on an assignment elsewhere. And, true to my instinct, I met him busy over files and, pronto, he granted audience where he gave assurance that Governor Okowa was determined to have all MDAs in the central secretariat complex. He made more revelations.

According to Chief Ochonogor, though the COVID-19 pandemic slowed down progress of work at the Secretariat a bit, contracts have been awarded for its furnishing so that civil servants would have their keys and walk into comfortable offices.

Chief Ochonogor has been quite visible on the political scene since the advent of the present democracy in the country in 1999. He has held several positions both in the Peoples Democratic Party (PDP) and the government; and, his last position before his current one was Senior Political Adviser to the Governor of Delta State.

Perhaps, since the creation of Delta State, even when the state was part and parcel of then Mid-West, later Bendel, the Ministry of Housing has never received the kind of attention it is currently receiving from Governor Okowa’s administration. As such, the joy of Chief Ochonogor knew no bounds when asked about Governor Okowa’s achievements in the housing sector. For someone so vastly knowledgeable, the exposition has further distinguished Governor Okowa as a man who is not only committed to ensuring stress-free governance but a man who is sincerely focused on laying solid foundation for a better state.

Housing is very important as the comfort of government officials has a lot of psycho-emotional role to play in the discharge of their duties. Ochonogor is confident that all the MDAs holed up in rented buildings and apartments will move to the secretariat complex before the end of this year.

Certainly, though this action may not benefit those who are earning so much from the state government through rent (that is why Okowa has to dare), it will create a lot of vacant accomodation which might precipitate a general crash in housing rent in Asaba and its environs.

The multiplier benefits of having all the MDAs housed in a complex can also be better imagined in terms of cost-saving and ease of doing government business.

And, as one pondered on what could have motivated the governor to take the bold decision to erect such an imposing edifice, a project which only the federal government could have dared to execute, Chief Ochonogor dropped another one. “Are you aware that Governor Okowa is also building a six-storey building for the High Court?

“We have done very well in the housing sector”, he went on.” Our governor, Senator Okowa is interested in leaving building-related legacy projects like the new secretariat complex. By God’s grace, the secretariat will be furnished and occupied within the year.

“Remember the Court of Appeal project, which is a significant milestone in the delivery of justice for our people. Our Governor intensified efforts to ensure its inauguration and also, financed the construction of the Ecumenical Centre of Christian Association of Nigeria (CAN) in Asaba. It is a complex structure and we are confident that it will be inaugurated before the end of this tenure.

“We have awarded contracts for the construction of an office complex for the Secretary to the State Government (SSG) and Chief of Staff, complete with residential apartments. It is a legacy project, because, these officials deserve befitting structures that will be comfortable for their operations.

“Don’t forget that we also have the Federal Road Safety Inspectorate School which has reached advanced stage of completion. We are doing such to complement federal government’s efforts. This is specifically for inspectors or inspectorate cadre of the FRSC. These projects are significant milestones.

“We also have the Leisure Park at Ugbolu, and an ultra-modern secretariat complex for the state Traditional Rulers Council.

“Of course, we have brought the contractor handling the 150 units of houses along the Ibusa road back to site. The estate will provide accommodation for low-income earners. At the Junior Staff Quarters, we also have six blocks of 12 flats each under construction.

“I am happy with what the governor is doing in the housing sector and I am proud to be part of this administration as these transformation projects will be of benefit to all of us for a long time to come. What we need is peace and political stability in our state.

“Some of these projects are being directly executed by the Ministry of Housing while the ministry is also playing supervisory roles in others.”

Ochonogor certainly can be described as a man who is comfortable manning the Ministry of Housing and he assured Deltans to expect more.

One unique attribute of the Okowa administration is that all projects have delivery time-frame. This means that the projects no white elephants; and, there is every likelihood that his eventual successor will be saved the headache of inheriting uncompleted projects that were initiated by this administration. In other climes, for instance, road projects that remained uncompleted for years are a common sight; but contractors handling road projects in the State, often than not, would deliver within months.

The Ministry of Housing has never received the type of attention it is having presently, and Chief Ochonogor disclosed that the ministry is also engaged in consultancy services to private and corporate property developers too. Moreover, it is in charge of renovation of all government housing projects apart from engaging in the construction or supervising housing projects by other ministries.

It is really a thing of joy that the housing sector is getting the deserved attention from government bearing in mind that the three basic needs of man are shelter, food and clothing.

In line with the development we are witnessing in the state, in what ways are you as a citizen supporting the government to succeed, bearing in mind that the success of the administration will impact positively on all of us?