The leader of the Indigenous People of Biafra (IPOB), Mazi Nnamdi Kanu, has condemned plans by Nigeria’s Presidency to flag off a gas pipeline... 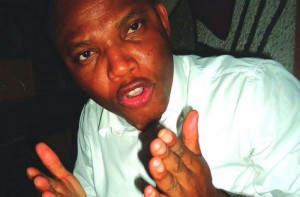 Ajaokuta-Kano-Kaduna gas pipeline…stacked, ready to roll out to the exclusion of the gas producing region

The leader of the Indigenous People of Biafra (IPOB), Mazi Nnamdi Kanu, has condemned plans by Nigeria’s Presidency to flag off a gas pipeline worth $2.8 billion to service the northern part of Nigeria on Wednesday.

Kanu accused the current Muhammadu Buhari administration of having more interest at developing the North above the South while particularly neglecting the eastern part of the country that form part of Nigeria’s South.

According to the IPOB leader, the sole aim of the gas pipeline known as the Ajaokuta-Kano-Kaduna gas pipeline (AKK) is to transfer gas from Biafraland to the ‘terror breeding Sharia territories’ in a bid to industrialize the north and from there export the gas to other Islamic North African countries.

Kanu who spoke in a statement made available to journalists in Awka by the IPOB media and publicity secretary, Comrade Emma Powerful, said:

“Here is the issue, the entire Biafraland including the Niger Delta, South East and South South have no industrial gas pipeline that will aid industrialisation but they are the ones that produce the gas. They drink from the same pool of dirty water they go to toilet in.

“Igbo land has the biggest gas reserves in the whole of Africa in Ohaji/Egbema/Ugwuta axis. Dangote has been busy purchasing choice acres of gas rich lands with the help of Governor Hope Uzodinma.

Kanu said that Oduduwa are also benefitting from the enslavement of Biafraland because, they too are getting their own gas pipeline from Igboland to the Ogun and Lagos area, to help provide steady electricity for companies there.

Kanu added: “This is why they want One Nigeria by all means. Now you know why you head to the north or west once you graduate.

According to Okenyi Kenechi, “Few months ago, Governor Wike dredged the Iwofe River to allow NLNG gas vessels to deck there. Before that, NLNG gas vessels take gas from Bonny to Lagos where gas is hauled in trucks back to Port Harcourt and other parts of the region.

That’s why cooking gas is cheaper in Lagos than in Port Harcourt and anywhere in Biafraland.”