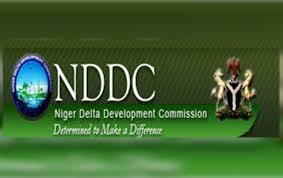 Making the call during a courtesy visit by Isoko traditional rulers and leaders of thought under the auspices of the Isoko Development Union Worldwide at the new NDDC headquarters in Port Harcourt, the NDDC Acting Managing Director, Professor Kemebradikumo Pondei, said that communities should be upfront in holding contractors to account.

He declared: “The communities should not sit back. They should monitor the projects in their areas because that is the only way to check dubious contractors who abandon projects.”

Pondei commended the Isoko leaders for helping in monitoring the performance of NDDC contractors in their area. He assured them that the Commission would “from time to time be publishing the payments to contractors, so that communities can assist in verifying them to march the money spent with the project on ground.”

“If the Interim Management Committee, IMC, is being told not to start any project and not to pay contractors that have worked for us, you can imagine the negative effect it would have on the lives of our people.”

Pondei noted that for NDDC to move forward, it should be executing big-ticket projects that would impact positively on the people and pay less attention to small projects. “We should be intervening in big regional projects. A situation where many projects are put in the budget and we end up not completing a good number of them is not good for us,” he said.

In his own remarks, the NDDC Acting Executive Director of Projects, Dr Cairo Ojougboh, thanked the Isoko people for identifying with the truth and showing solidarity with the IMC, adding: “We are glad that Niger Delta stakeholders appreciate the new system in NDDC, where transparency and accountability are the watchword as exemplified by the publishing of payments to contractors.

“We are happy that Nigerians are impressed by that action. But even as we are doing this, the persons who want to forcefully take over NDDC and truncate what we are doing are busy spreading falsehood. Nevertheless, we are very proud of what we have achieved so far and that is why we can publish them for everyone to see.”

On the new NDDC headquarters, he said that when the IMC assumed duties, it was mandated by the Minister of Niger Delta Affairs, Senator Godswill Akpabio, to work round the clock to deliver the project and move into the building. The work is 95 per cent complete, and in the next four weeks the building will be ready for commissioning by President Muhammadu Buhari.

Ojougboh said: “I thank you for appreciating Mr President because his support for the region is enormous. He has demonstrated his love for the region by ensuring the clean-up of Ogoni land and supporting the NDDC and its supervising ministry to ensure that detractors do not succeed in stalling the development of the Niger Delta.”

The President General of Isoko Development Union Worldwide, High Chief Iduh Amadhe, thanked President Buhari for ordering the forensic audit currently going on in NDDC and commended the transparency and accountability exhibited by the Commission’s IMC.

He said: “Your publication on June 29, 2020 of the list of contractors that have been paid is praise worthy. That has not happened in the history of NDDC. We thank you for that. Again, we are aware of the forensic exercise that is going on. That is another display of transparency and accountability for which Niger Deltans are happy.”

He lauded the IMC for moving into the permanent headquarters, a feat he observed, previous managements could not achieve. “Many groups have come to lead the NDDC. This is the first time the Commission will publish the names of contractors paid and the amount,” Amadhe said.

Amadhe appealed to the NDDC to ensure the completion of the Uzere-Umeh-Patani Road which had been on-going for many years.

He noted that Isoko was the second place crude oil was discovered in commercial quantity in 1958 at Uzere, immediately after Oloibiri, stating: “Oil from Isoko contributes about 19 per cent of the total output of the production quota from Delta State.The Isoko ethnic nation has eight oil fields, yet the wealth generated from Isoko land is being used to develop other parts of the country at our own expense and peril.”