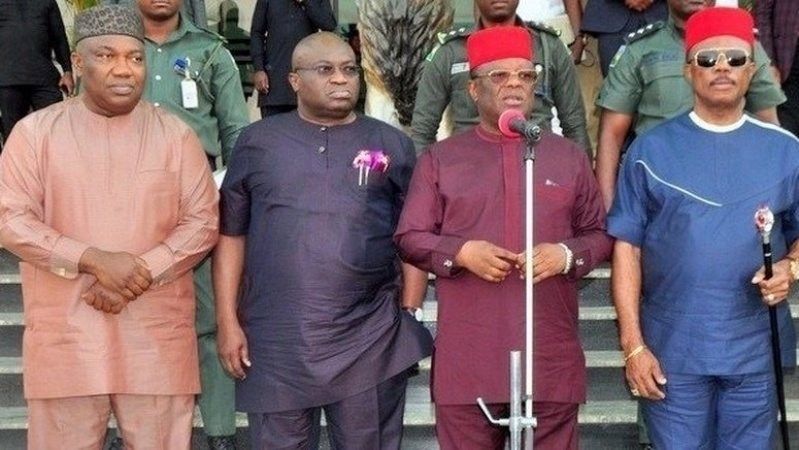 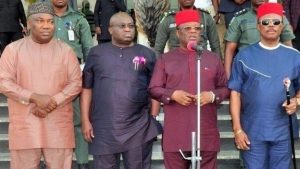 The Human Rights Writers Association of Nigeria (HURIWA) has dismissed community policing as proposed by the police authorities in Nigeria as deceptive and urged the governors, legislators, ethnic leaders and civil society leaders from the South East of Nigeria to borrow the South West Amotekun vigilante model to checkmate the relentless killings of innocent citizens by armed Fulani herdsmen. The group also condemned the ceaseless violent attacks on the Christian dominated Southern Kaduna State by armed Fulani herdsmen whilst the Kaduna State Governor Nassir Elrufai “speaks from both sides of his mouth and does nothing to stop the incessant killings with the latest being the killing of 21 villagers in Kagoro, in the Laura local government area of Kaduna State by armed Fulani herdsmen who were said to be hiding on top of the Kagoro hills. HURIWA recalled that Laura Youth had last month told the World that there were armed Fulani herdsmen camping on top of Kagoro hills but both the Kaduna State Governor and his Commissioner for Internal Security disputed the claim.

The Rights group said the latest attack has validated the allegations by the Kaura youths just as it urged that there should be immediate declaration of a State of emergency in Kaduna State so that soldiers and armed security forces can continuously comb the forests and hills to degrade the armed Fulani herdsmen camping in those areas. The group further urged the citizens to form vigilante groups to defend their lands and their lives. Below is the full text of a statement released by the HURIWA:

Over two decades after the restoration of elected civilian government in Nigeria, serious existential challenges persist at the federal, state and local levels. These include persisting low public confidence in the capability of the electoral system to produce truly elected political leaders at various levels.

Others include implementation of economic reform programmes that have neither improved public services nor produced jobs for thousands of young people graduating every year from higher institutions. Pervasive corruption, which has reduced government’s annual budgetary pronouncements and development targets to hollow rituals scuffed at by a cynical public.

Above all, an alarming spate of armed violence and terrorism over widening space and territories and apparent inability of the security forces to restore law and order, bring the perpetrators to justice and reassure a traumatised citizenry.

While no region or state in Nigeria is immune from the above grim picture, political and security governance in the South East has in recent times become a source of major concern to many stakeholders in the region.

It is indeed an irony of history that a region with the most advanced traditional features of democracy, accountable and transparent governance system exemplified in its community governance system has today become a ravaging ground for Armed Fulani Heardsmen and other forms of terrorism

No doubt, Community policing was very effective in enabling the pre-colonial Igbo society not only in fighting crime, but also in preventing it. However, modern governance systems have generally replaced traditional systems, even when the latter were very effective.

Given the current security challenges in contemporary Nigerian society, there is a need to revisit this model of community policing for the purpose of preventing and curbing crimes particularly the killings and other forms violence occasioned by Armed Fulani Heardsmen.

Taking up the challenge as a foremost Civil Rights Group, with the single agenda of building a formidable and economically strong united Nigeria based on rule of law and respect for rights, equity and justice, do make this statement rejecting the Community Policing template agreed by the Inspector General of Police with  the South East Governors and urging various stakeholders to mount pressure for the South east to adopt the South West Amotekun model..

The destructive activities of rogue herdsmen on farms in communities in the South Eastern states of Nigeria are becoming worrisome and frightening. With their hordes of cattle, they have been invading farmlands with reckless abandon and making a mess of the crops which the poor village farmers toiled to put in place. Sadly, in some cases, these killer herdsmen even violently attack and kill the farmers if they have the gut to question them.

The evil activities are taking place in all parts of the South East; Abia, Imo, Anambra, Enugu and Ebonyi. The people have been crying especially in the face of the emphasis the Federal Government places on Agriculture. None of the herdsmen have been arrested and tried by the law enforcement agencies. Yet the evil acts continue unabated.

Ozuitem Community in Bende area of Abia State was invaded and attacked by the herdsmen and nobody did anything. People were slaughtered and properties destroyed. A month later, another community in the same Abia State; Ndi Okereke Abam in Arochukwu Council was equally attacked by the herdsmen. There, they set farm houses ablaze and killed the men and raped women they captured, and no one came to their rescue.

On the 14th of June, 2020, the same herdsmen attacked a commercial bus carrying traders, mainly women returning from the market along Agbani-Ugbawka rod in Nkanu East Council area and abducted three young women after robbing the traders. Again, these herdsmen butchered a whole family and a catholic seminarian on Apostolic work in Nkanu.

In Imo state, herdsmen have unleashed terror in Oguta, Ohaji-Egbemma and Orlu as well as other parts of the State. The recent killing of Ozoemena Iriaka from Umuekpu in Agwa Community in the same Oguta L.G.A was an addition in the list of casualties of these murderous herdsmen.

In all these, various stakeholders have cried to high heavens, petitioned here and there and complained everywhere, yet the authorities never cared. Worse of it all is that the internal outcry over these atrocities has become deafening.

Even as the International Community has rated these herdsmen as the fourth deadliest terror group in the world, yet the Nigerian authorities have looked the other way, may be to create a scenario that would elicit retaliation so they would criminalize poor farmers and annihilate them and exonerate these murderous predators.

These farmers at the grassroots whose livelihood depend almost entirely on their farmlands have had those farms ravaged by the herdsmen and their cattle. Sadly, as we write, there is hardly a single herdsman standing trial anywhere in Nigeria for these killings and atrocious acts; hardly can one find any in detention or even being prosecuted.

More worrisome is that law enforcement agents posted to the region have continued to conduct themselves in manners that suggest that they are an occupation force preying on the people rather than protecting them.

As we may know, the Western Nigeria Security Network (WNSN) is a security outfit based in all the six states of the South Western Nigeria, responsible for curbing insecurity in the region. Codenamed Operation Amotekun (Leopard), it was founded on 9 January 2020 in Ibadan, Oyo State Nigeria as the first regional security outfit initiated by a geopolitical zone.

The establishment of the security outfit was subject to the decision by all the six state governors at the regional security summit held in Ibadan Oyo State, Nigeria on June 2019 through Development Agenda for Western Nigeria Commission (DAWN).  The members of the outfit were drawn from local hunters, the Odua Peoples Congress (OPC), Agbekoya, Nigerian Security and Civil Defense Corps (NSCDC) and vigilante group.

The operatives of the security outfit assist the Police, other security agencies and traditional rulers in combating terrorism, banditry, armed robbery, kidnapping and also help in settling herdsmen and farmers contentions in the region.

Not many issues in Nigerian politics and social discourses are able to engage national attention for two weeks and more as Amokekun did when it was introduced by the South West Governors. It seized the headlines in major newspapers and generated lost of both serious and controversial conversations.

Why We Advocate the Amotekun Model In the South of Nigeria to Checkmate the Killings of Citizens by Armed Fulani Herdsmen:

So, if the government has failed and every now and then wrings its hands in helplessness, should the people knowingly surrender themselves to be killed and maimed by the growing band of marauders in the land? God Forbid!

Although, the Attorney General and Minister for Justice; Abubakar Malami had earlier described the Amotekun as illegality, the question should be Where is law and legality when innocent Nigerians are being killed and maimed by bandits? Amotekun has the legality and authority of the Houses of Assembly of the South West state which exercised their Constitutional powers as enshrined in section 4 of the Constitution of the Federal Republic of Nigeria of 1999 (ad amended).

Indeed, there is nowhere in the criminal code or Police Act that says the duty of securing lives and property is the exclusive preserve of the police. Nowhere! Infact the POLICE Act authorised citizen’s arrest of suspected criminals.

There are citizens’ rights. In fact, the right to life and safety is paramount and it remains the reason of all other rights. What other right will be useful or necessary if the right to life (Section 33 subsection 1 of the Constitution) is compromised? The governors of the South East should resort to self-help to protect their people just as the South West Governors did. Is it not even strange, if not curious, that in spite of the many cases of massacre, pogrom and lethal raid of communities across the country, no one, yes, no one has been arrested, prosecuted or jailed for the sundry heinous crimes against the rest of Nigerians?

Is it that the Fulani herdsmen who have been in the vanguard of the attacks, killings and abductions across the land enjoy unofficial immunity? Is it not clear that they are treated specially, preferentially and with kids’ gloves? They seem to be carrying on with the confidence: “if the president be for us, who can be against us?”

If the state governors are addressed as the Chief Security Officers of their states (even though they do not control any lever of security agencies), it beholds on them to devise ways and means of protecting their electorate, including even law-abiding non-indigenes. Its mere official shenanigan to describe them as Chief Security Officers if they cannot secure their people. The governors of the South East region should take a great and bold initiative in deciding to form the Amotekun model.

We want to reiterate that the primary responsibility of Government is to secure lives and properties of its citizens (Section 14 (2) (b) of the Nigerian constitution. When lives are secured, you talk of investments. If the government is serious about securing the region, they should be proactive in arresting the bad security situation caused by killer herdsmen and other terrorist groups that is now bedeviling the region. Let the people protect and defend their lives and ancestral lands now and forever.