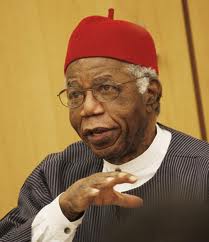 ACHEBE WAS A MOVEMENT, NOT JUST A MAN. HE WILL NEVER DIE – OKONJO-IWEALA

We received the news of the passing of Prof Chinua Achebe with a sense of profound loss. Yes, he was 82 years old and...

We received the news of the passing of Prof Chinua Achebe with a sense of profound loss. Yes, he was 82 years old and by any measure not too young to die. But Achebe had for so long been a part of our lives that the thought of his death has an unreal quality.

Additionally, having known him and his wonderful wife, Aunty Christy since I was a teenager, there is, for me, a very personal feeling to this loss.

For me and countless others, he was a personal inspiration and indeed a hero. That is why my co-author, Tijan Sallah and I wrote the biography of Achebe for young adults called “Teacher of Light” to capture the essential Achebe for our young people.

Professor Chinua started life as a man, but ended it as a MOVEMENT – a movement for African literature, good governance and the dignity of man.

Dr. Ngozi Okonjo-Iweala
Coordinating Minister for the Economy and Minister of Finance.