*Says APC not ready for election *Character to determine election outcome   Rivers State Governor, Nyesom Wike, has called on the Federal Government to...

*Says APC not ready for election 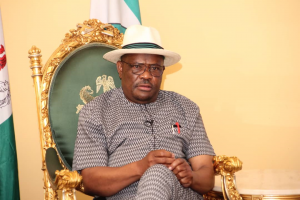 Rivers State Governor, Nyesom Wike, has called on the Federal Government to stop the All Progressives Congress (APC) in Edo State from perpetrating acts of violence.

Governor Wike stated that the Edo APC is plotting violence that will lead to a constitutional crisis and suspension of the election.

“They are so much desperate to take over power. Desperation can lead to violence. If you watch that video where Ize-yamu told those he called “lions and tigers” of Edo to move from unit to unit, you will understand the level of violence they are planning.

“PDP is restraining itself. We want free and fair electoral contest.  But APC does not want the election because they know they will lose,” he said.

Governor Wike stated that character would  determine who would be the next Governor of Edo State.

“No progressive Governor will support Ize-Iyamu because Adams oshiomhole has already killed him with all the things he had said against him before which have not been denied.

“That is why I say character is an issue in this election. No matter what they promise to do under the pretence of  having a simple political agenda.

“The question to ask is,  this man who says he will execute this,  who is he? Is he the man I can believe?

“Edo people are saying that after joining him to fight godfatherism yesterday, they will not allow him to become another godfather.

“I have also seen Oshiomhole kneeling down before traditional rulers.  Meanwhile, the APC candidate is not kneeling. Why is oshiomhole not prostrating?

“You see, he is using such pretence  to get what he wants.  He is so desperate that he is doing everything to secure his  political future since he is no longer relevant at the national level.