Support I Got From Wike Paid Off – Obaseki

*Says Edo electoral victory strategies were hatched in Rivers State Edo State Governor, Godwin Obaseki has described the consolation he got from the Rivers...

Edo State Governor, Godwin Obaseki has described the consolation he got from the Rivers State Governor, Nyesom Ezenwo Wike as the second pivot for his electoral victory.

The first pillar, he said, is God who crowned the efforts of all his supporters. 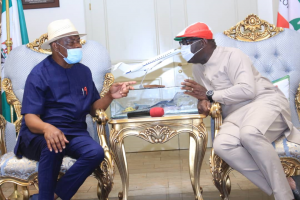 Governor Obaseki with on a thank you visit to Governor Wike at the Rivers State Government House, Port Harcourt. 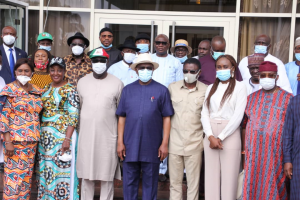 Governor Obaseki with some political leaders of Edo state on a thank you visit to Governor Wike at the Rivers State Government House, Port Harcourt. 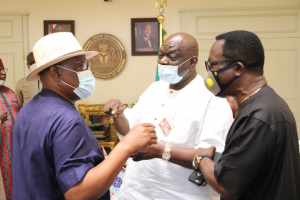 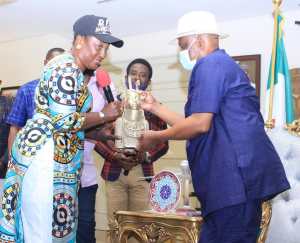 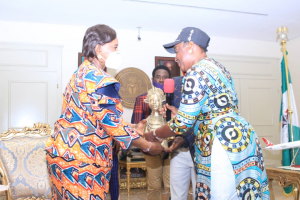 Governor Obaseki was speaking when he led some political leaders of Edo State on a thank you visit to Governor Wike at the Rivers State Government House, Port Harcourt.

He noted the commitment of Governor Wike in ensuring electoral victory for him by relocating to Edo State despite the needless attacks from the opposition.

“After I was pushed out of my former Party, this house was the first place I sought solace. You took me in as a brother,  out of the storm,  changed my cloths and gave me food to eat.

“It was in this house, the Campaign Council met to work out the key strategies that led us to victory.

” You mobilised  people across the country. You moved to Benin, went through the humiliation and attacks. You supported us and we won.

“It will be a sin against God if we do not come to say thank you. Even if  the victory we are celebrating is from God.  He has used people like you to make it happen,” he said.

In his response,  Rivers State Governor, Nyesom Ezenwo Wike said his support was informed by the fact that Governor Obaseki was  courageous and fearless.

According to him,  standing against forces of godfatherism was not easy but Governor Obaseki made himself available to protect the interest of  Edo State.

“Our work would have been difficult if he did not make himself available. I cannot  support a lily hearted person. Governor Obaseki was firm.

“It is not easy to fight godfatherism.  But he has the interest of Edo people at heart. Together,  we have conquered it, ” he said.

Governor Wike also clarified that he had advocated unity within the party.

He explained that when Governor Obaseki joined the PDP,  he pushed for all interests to be considered.

That position,  he said,  paid off because the Party went into the electoral battle as a united family and clinched the victory.

“I did not want division. I insisted that it will be good we are all together. This will make it easy to go into the electoral battle and win.

“I thank you my brother,  Obaseki for carrying everybody along in the Party. Edo people are also looking up to you to  forgive everybody.

“Forgive  your political opponents.   I am happy that today,  South -South  is under one political party. This will make for integration. We can speak with one voice in moving Nigeria forward.

“This is the sweetest electoral victory I have ever witnessed,” he added.

The items, she said, will serve as symbols that will strengthen the existing friendship.

According to her,  we have to remain as one to attain the desired plans of God.