Governors and people of the South-South geopolitical zone have demanded for restructuring in line with the principle of true federalism, to guarantee peace, security... 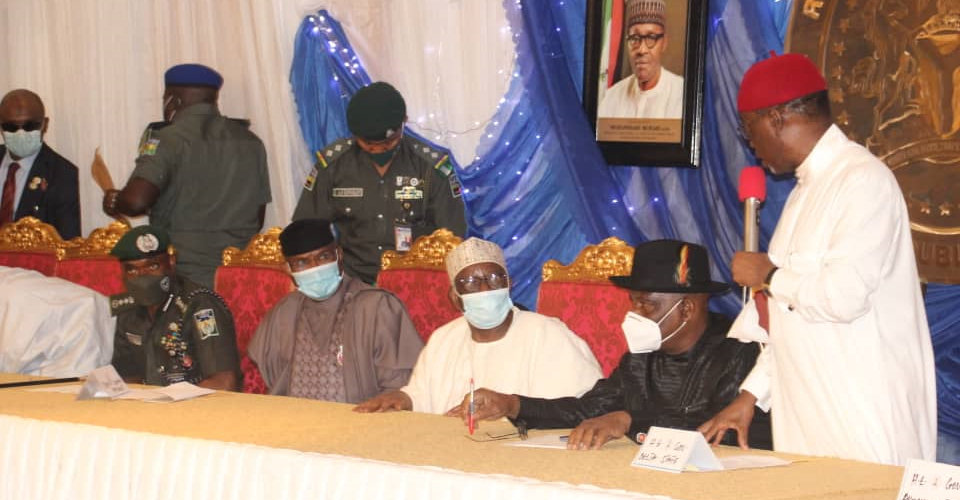 Governors and people of the South-South geopolitical zone have demanded for restructuring in line with the principle of true federalism, to guarantee peace, security and stability of Nigeria. 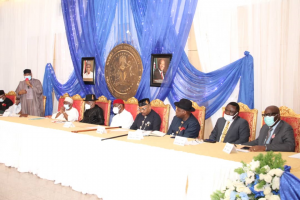 R-L, Governor Ifeanyi Okowa of Delta State, Governor Nyesom Wike of Rivers State, Rep. of President Muhammadu Buhari and Chief Of Staff to the President, Amb. Ibrahim Gambari in a chat during the South South dialogue meeting with the President in Port Harcourt.

The governors , observed that the country is not at peace with itself and not working as it should, particularly, for the people of the South-South region.

Chairman of the South-South Governors forum and Governor of Delta State, Senator Ifeanyi Okowa stated this as the position of the zone during the regional stakeholders meeting with presidential delegation led by the Chief of Staff to the President, Ambassador Ibrahim Gambari at the Government House, Port Harcourt on Tuesday.

Governor Okowa, explained the people of the South-South are committed to restructuring of Nigeria in a way that guarantees true federalism and devolution of powers to the states to create and manage their own police and security architecture under a federal structure.

“True federalism guided by the principle of derivation, revenue sharing and control of resources by each State of the federation as it was the case in the first republic.”

He said the kind of federation the South-South geopolitical desires, is one where federating units are constitutionally empowered to create their own structures like Local Government Areas, manage their elections and control their judiciary.

“We are all aware of the huge endowment of this country. As such, it is imperative to stress that with a little bit of efforts, imagination, hard work, sacrifice and leadership, every state of the Federation as of today, has the ability and capability to contribute to the national purse. This should be encouraged rather than the whole country depending substantially on a region of the country.

“What is worse and even more painful in this ugly situation is the deliberate lack of understanding, empathy and the uncompromising attitudes of some Nigerians, who have refused to understand the challenges of the South-South region of the country especially, the degradation of the environment and our waters. As a result, most of the demands of the region have remained unattended to while the resources of the region have been used continually to develop other parts of the country”.

The governors reiterated the call for the relocation of the headquarters of major oil companies, NNPC subsidiaries from Lagos and Abuja  to the South-South region.

Governor Okowa requested for immediate implementation of the consent judgment entered in the Supreme Court Suit No: SC/964/2016 to enable the South-South region get its share of $55billion shortfall  of collection on deep offshore and inland basin production sharing contracts.

The governors further called for the reconstruction and rehabilitation of the region’s major seaports in Port Harcourt, Calabar, Warri in order to enhance the economic development of the South-South region.

In addition, they demanded that the two refineries in Port Harcourt and one in Warri that have continued to bleed the country’s resources in the name of turn around maintenance, should be privatised. According to him: “Enough is enough. Let us now privatise them and in doing so however, allow the States and the region among others, considerable equity in the name of fairness and justice”.

Concerned about the rot in the NDDC, the governors observed that one of the major failures of the intervention agency is its refusal to forge and foster synergy, consultation and cooperation with the state governments especially, on project location, development and execution.

“We have resolved and we, as the State governments will no longer allow NDDC to execute any project (s) in any state of the region without it consulting State governments. Frankly, enough is enough and we have a court judgment to back our position.”

In his remark, the Chief of Staff to the President, Ambassador Ibrahim Gambari, said the stakeholders meeting was at the instance of President Muhammadu Buhari, to the presidential delegation comprising of all the Ministers from the region to visit and consult with representatives  of the people  regarding the recent EndSARS protest.

Gambari, noted that reports indicated that there were instances , where breakdown of law and order was reported across various locations in the South-South states. He lauded the governors of the South-South States for their quick response and actions in addressing the EndSARS crisis.

Beyond the EndSARS issue, he said, the President acknowledges that the citizens in the region have also been dealing with other concerns that are particular to the region such as the degradation of environment due to decades of mishandling and adherence to environmental standards.

The Deputy  President of the Senate,  Obarisi Ovie Omo-Agege, urged the leaders of the region to avail themselves of the on going review of the 1999 Constitution by the National Assembly since most of the issues contained in their demands are constitutional matters.

The Director General of Department of State Services, DSS, Yusuf Magaji Bichi, lauded Governor Nyeson Ezenwo Wike, for his stance against the outlawed Indigenous Peoples of Biafra (IPOB) which as alleged by the governor, hijacked the EndSARS protest in Oyigbo where arson, killings and reprisals had taken place.

The Inspector General of Police, Mohammed Abubakar Adamu, said fake news gave impetus to the nationwide EndSARS that  culminated in the death of civilians, police personnel and their assets.

Adamu alleged that intelligence has confirmed that the EndSARS protest was funded from within and outside the country. He further added that one of the primary objective of the protest was to effect a regime change.

**Key Points at the Presidential meeting with leaders of South South region in Port Harcourt:

The Chief of Staff to the President, Ambassador Ibrahim Gambari, is leading the federal government delegation to the meeting.

The six Governors and leaders in the zone in a common position presented by Chairman of South South Governor’s Forum, Gov. Ifeanyi Okowa, made the following demands:

* Immediate relocation of headquarters of oil multinational to their operational bases in the South South region.

* Immediate relocation of government -owned oil subsidiaries from Lagos and Abuja to the South South region.

* Immediate privatisation of the two refineries in Port Harcourt and the one in Warri for effectiveness.

* Call for release of all funds due NDDC and that henceforth, all NDDC projects MUST be done in consultation with State Governors.

* Reactivation of sea ports in Calabar, Port Harcourt and Warri. Then, the Lagos to Calabar rail line.