PDP Means Well For Nigerians Than Other Parties, Says Wike

*As Gov. Ortom tells APC Federal Government to promote justice, fairness and truth.
Governor of Rivers State, Nyesom Ezenwo Wike has challenged the ruling All Progressives Congress (APC) to showcase development projects they have delivered to the people in their various states to prove that they also mean well for the people. 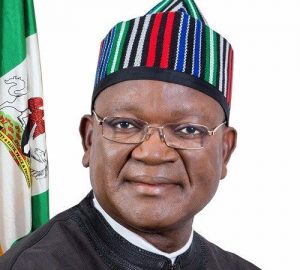 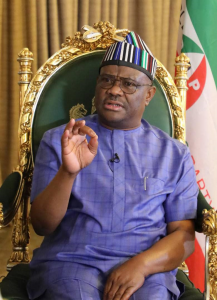 Governor Wike gave the challenge at the inauguration of Tombia Road, Ndoni Street and Amaji Street in New GRA Phase 2, which was performed by the Governor of Benue State,  Samuel Ortom on Tuesday in Obio/Akpor Local Government Area.

The governor said it is only PDP governors that are developing and delivering infrastructural projects in their various states. According to him, these projects  have continued to improve the well-being of the people to affirm that development is happening only in PDP controlled states.
“Some few weeks ago,  I was invited by the governor of Benue Stat to come and commission some projects. I went  and I did commission not less than three road projects.
“They received us very well and I did say to him that the people of Rivers State will also like him to come and also commission projects in the state. So that Nigerians will know that the party in opposition is the party that means well for the development of this country.
“We challenge the ruling party to tell their states to roll out projects and invite people to come and commission them.”
Governor Wike described  his Benue State counterpart as a man who is committed to the development of his people, forthright, courageous and stands in defense of the well-being of Benue people.
He explained that when Governor Ortom was being persecuted,  and made to pass through intimidation,  he stood firm,  and stayed with the people, which justifies the decision he associates with him.
Governor Wike said his  relationship with Governor Ortom, is designed to make Rivers and Benue States including PDP to move forward.
“One of the reasons why I invited the Governor of Benue State here is to let people know that there are people who are committed to the growth and development of this country. There are people who will never be intimidated because of their views. There are people who stand against injustice in this country.
“Governor Ortom is one of those governors that will stand firm in whatever he believes in. He does not care whether you’ll deny the people of Benue State what is due to them. He will still say the truth as it is.  You all know what has happened in Benue State,  what he has passed through, how they have tried to intimidate him but he has stood firm and said no.
“That’s the same thing we are doing here. No matter all the intimidation and what they are trying to do to us, we have stood firm to defend the interest of our state. And so for me,  I will like to associate with people like this and that will make our state, our party and will make our country  to move forward.”
On his part,  Governor of Benue State, Samuel Ortom noted that God has destined him and Wike to work together as brothers and friends in speaking up for the voiceless and marginalised people in the country.
According to him,  Nigeria has since 2015 ceased to be a country where equity, justice and fairness are promoted. He  asserted that until those virtues are embraced nationally,  every citizen will remain entangled and never be free.
He said there is no security in Nigeria and the economy is also in bad shape because of the depreciation the  Naira has suffered under the leadership of the APC.  He further lamented the growing unemployment rate in the country that gave impetus to youth restiveness tagged #EndSARS protest.
“Today,  there is no more employment for our youths. That gave rise to the youth restiveness agitation called #EndSars protest. I think any right thinking man should not be thinking about leaving PDP for any other party or even the ruling party.
We cannot be one party state. The PDP in 2015 did not suppress the opposition party to turn Nigeria to be one party state. Then, that is not democracy anymore and so we want to appreciate governor Wike for standing as the beckons of the PDP.
“Wike is a very strong voice not just in Rivers State but in the whole country.  He is a courageous and fearless  leader,  who is out for equity,  fairness and justice. And that is what we need in our country today.
“As at today,  the ruling party,  has not given us equity, fairness and justice. That is why we are having problems in this country.”
Governor Ortom said when PDP was the ruling party,  it never suppressed other parties but APC is driving the country along one party line and urged Nigerians to resist this.
Associating with Wike,  he said, is rewarding because,  aside the fact that it helped facilitated his return to PDP and got its ticket for second term as governor,  he got morale and financial assistance for the Internally Displaced People (IDPs) when Benue State was under attacks from herdsmen.
“There came a time when I was an outcast and my people in Benue State were outcast. Nobody cared to visit for fear of persecution.  We were like the lepers in the Bible.
“Yet,  Wike stood up and came all the way to Benue State to see how we were fairing. We had over 500,000 IDPs in camps then.  It was not easy to fend for these people. Wike came with very distinguished leaders from Rivers State.
“He gave us support that we never expected more than any other support, including what others did.  We appreciate it and pray that such a thing should not come to Rivers State.”
Also speaking, the Rivers State Commissioner for Works, Elloka Tasie-Amadi said the Wike administration is building new roads which are long term investments necessary to promote commerce and enhance social economic activities in the state.
“The Tombia Streets has been reconstructed from a single carriage way of 8 meters to dual carriage way of 14.6meters with well street lights required  to support and promote its business and commercial district. Ndoni Street  and Amaji Street both are expanded from 6.5meters to11metres and 6.8metres to 12 metres respectively “