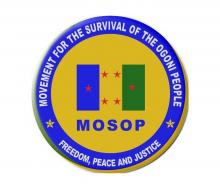 The Movement for the survival of Ogoni people (MOSOP) has alleged that its annual Ogoni Day Celebration was disrupted by “Government forces”. The President...

The Movement for the survival of Ogoni people (MOSOP) has alleged that its annual Ogoni Day Celebration was disrupted by “Government forces”.

The President of MOSOP, Mr. Lazarus Tamana, made this known on Monday when he addressed some journalists at the NUJ Press Centre, Moscow Road, Port Harcourt.

He further alleged that Police personnel prevented members of the group from celebrating their annual “Ogoni day” which usually held every 4th of January.

Tamana noted that Ogonis came out from their villages only to be prevented by the police after permission was granted few weeks back.

According to him, although the development is another plot to silence and gag the Ogonis the plans will not work with the new leadership of the non-violence group in place.

The MOSOP president also announced the establishment of MOSOP desk offices as a new concept and innovation where people would walk in from their respective villages and lay their complaints for immediate action.

He said that the new desk offices of the group included Environment and Human Rights; Health and Education; Social Welfare and Legal; Security and Community matters, and Business Entrepreneurship.

Tamana also stated that the Hydrocarbon Pollution Remediation Project (HYPREP) must follow all the recommendations of UNEP on Ogoni land published in August, 2011, adding that “any deviation from this process will amount to serious violation of the rights of the Ogoni people”.

He reiterated that the vision of the current leadership of MOSOP is to reposition the group for the socio-economic and environmentally vibrant grass root organization, insisting that the Shell Petroleum Development Company remained persona non grata in Ogoniland.

According to him,” any activity of the company in Ogoniland is illegal, not until all pending issues are resolved”.

He promised to initiate a reconciliation process to bring on board all people of Ogoni just as he appealed to those who were aggrieved to embrace the peace initiative.

He also stated that “the best way forward is for the Ogonis to come together and focus on achieving the aspirations of the Ogoni people”.