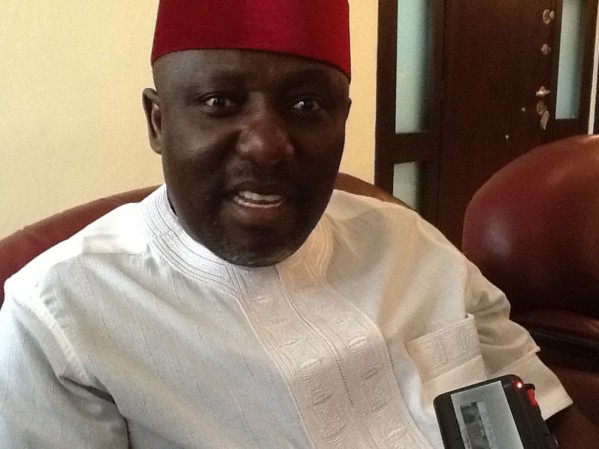 How I Regained Freedom From Police Custody — Okorocha

•Why he was released — Imo Government   Former Governor of Imo State, Rochas Okorocha, has recounted his experience in the clash between his...

•Why he was released — Imo Government

Former Governor of Imo State, Rochas Okorocha, has recounted his experience in the clash between his security aides and that of Governor Hope Uzodinma over his forceful unsealing of the Royal Palm Estate sealed by the state government.

He also gave an insight into how he regained his freedom, describing the action of Governor Uzodinma’s aides during the clash as thuggery, and urging people in the state to condemn it.

“What happened yesterday was a display of thuggery. I never expected that of a governor, he did what he did to humiliate me, he may not end well as a governor,” Okorocha said.

The embattled Senator, who addressing supporters from the All Progressives Congress (APC) who besieged his Spibat mansion on a solidarity protest, added: “Go to Orlu; people are being intimidated by the governor and his thugs and I don’t know what he wants to achieve.

“I think he wants to make people fear him. He has been busy chasing shadow of violence since he came in; he has demolished Somto Hospital, tunnel, roundabouts that have brought beauty to the state and not replacing them. I think he is just doing that to spite me.”

Okorocha acknowledged the intervention of the presidency in the matter which he said saved the situation and averted what would have resulted to chaos. “I want to thank the presidency for intervening in the matter – those that intervened saved us from a mess. I do not want to soil my hands in blood, may be other things would have happened.

“But being a man of peace does not mean he should take my peaceful nature for granted. I thank the presidency very much. Uzodinma wants to rule by intimidation rather than making peace, he wants to do that by intimidation. It is not acceptable. A governor who has not paid his workers and pension, inciting violence on a daily basis, now he is taking it personal with my family.”

Okorocha also alleged that the police men who arrested him were compromised. He said: “I’m not sure that those security men who I saw that day are real police – even the army. One of them stabbed my aide, so I’m calling on the police to investigate these officers including the Special Assistant to Uzodinma, Chinasa Nwaneri, and Eric Uwakwe who was shooting and beating my aides.”

Revealing how he left the police detention Okorocha said: “At about 11 pm or thereabout, they asked me to go. I didn’t want to go because I told them I wanted to stay for three months. I would have remained there but they prevailed on me.”

The Imo State Government, however, gave a different reason for Okorocha’s release on Sunday night after several hours of detention.

Speaking to The PUNCH, the state Commissioner for Information and Strategy, Declan Emelumba, said that Okorocha was released by the police on “medical grounds.”

Emelumba said that the release of Okorocha didn’t mean he won’t answer to the “offence he committed”.

Emelumba said: “Okorocha was released on Sunday by the police on medical grounds. The man was purging and stooling consistently, the police had to release him on medical grounds to enable him to take care of his health. His release doesn’t mean he will not answer his case.”

Sources: Daily Sun and The PUNCH