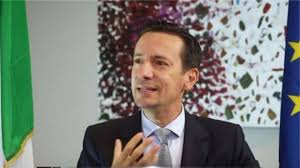 Italy’s ambassador to the Democratic Republic of Congo, his Italian bodyguard and a Congolese driver were killed Monday in an attack on a UN...

Italy’s ambassador to the Democratic Republic of Congo, his Italian bodyguard and a Congolese driver were killed Monday in an attack on a UN convoy in the east of the country, Italy’s foreign ministry and local authorities announced.

The convoy was attacked at around 10:15am local time near the town of Kanyamahoro, a few kilometres north of the regional capital Goma, a spokesman for the Virunga National Park told Reuters.

The deaths of the ambassador, Luca Attanasio, 43; Italian military policeman Vittorio Iacovacci, 30; and their Congolese driver, whose name has not been released, were confirmed by the Italian government in a statement.

Italian President Sergio Mattarella condemned the “cowardly attack” and offered his “deepest condolences” to the families of the victims. “The Italian republic is in mourning for these servants of the state who lost their lives,”  Mattarella said in a statement.

Reporting from Rome, FRANCE 24’s Seema Gupta said that Italian Foreign Minister Luigi Di Maio has vowed his ministry “will work to get to the bottom of the attack and find out exactly what caused their deaths”.

Security in the Democratic Republic of Congo’s eastern region of Kivu has been deteriorating in recent years. The region is home to the UNESCO-listed Virunga National Park, Africa’s oldest, whose inhabitants include a world-famous population of mountain gorillas.

“We know that the attack took place this morning near the Virunga National Park, which is an area where many armed groups are said to be active. According to the Kivu Security Centre, an NGO that monitors attacks in the region, there are four armed groups active in this particular area, including the FDLR-Foca (Democratic Forces for the Liberation of Rwanda) and ex-members of the M23 rebellion,” explained FRANCE 24’s Clément Bonnerot, reporting from the Congolese capital, Kinshasa.

The DRC’s interior ministry, in a statement, blamed the attack on “members of the Democratic Forces for the Liberation of Rwanda (FDLR)” adding that four people were also kidnapped during the attack, one of whom was later found.

Congolese media reports citing local sources said the attack took place in the same area where two British tourists were kidnapped by armed men in 2019, explained Bonnerot. “This region definitely has a history of violent attacks with the presence of several armed groups,” he added.

More than 200 of the park’s rangers have been killed in attacks stretching back more than a decade.

The UN’s refugee agency, the UNHCR, said last week that more than 2,000 civilians were killed in north and south Kivu and Ituri province last year.

Attanasio had been representing Italy in Kinshasa since 2017, first as head of mission and then as ambassador from October 2019.

The father of three is remembered for his warmth and professionalism, and his death sparked an outpouring of grief from politicians and colleagues.

Born in northern Saronno, northwest of Milan, on May 23, 1977, Attanasio joined the diplomatic service in 2003, according to the foreign ministry.

He was hailed as “a man gifted with uncommon courage, humanity and professionalism” by Emanuela Del Re, who was deputy foreign minister from 2018 until last month. Del Re said she worked with Attanasio on the emergency repatriation of a “very sick” nun from DR Congo.

“I remember his infectious smile, his class, his great knowledge of African affairs,” she said. “Ciao, my dear esteemed Luca.”

The envoy suffered “gunshot wounds to the abdomen” and was taken to a hospital in Goma in critical condition. He succumbed to his injuries in hospital, according to local officials.

The Rome-based World Food Programme (WFP) said that Attanasio was on a fact-finding mission with the UN’s food agency.

“The delegation was travelling from Goma to visit a WFP school feeding programme in Rutshuru when the incident took place,” it said in a statement.

“The attack … occurred on a road that had previously been cleared for travel without security escorts,” it said.

(Source: FRANCE 24 with AFP and REUTERS)