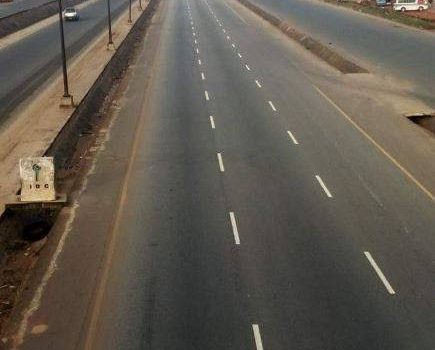 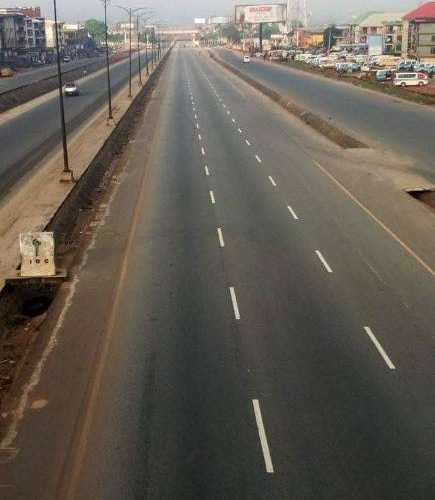 Streets in many parts of the south east are deserted in the wake of a sit-at-home order issued by the Indigenous Peoples of Biafra.

The order is to mark two days of Remembrance for Biafra Day.

The order has been controversial in recent years, with state governments dissociating from it.

Militarisation in the region to combat IPOB is thought to have forced many to stay indoors.

The result is empty streets across Enugu and Abia states, according to images shared by residents in the region.

Streets in Umuahia the Abia State capital are virtually empty and deserted as residents remain indoors in total compliance with the sit-at-home order given by the leadership of IPOB to mark this year’s Biafra Day.

Major streets, roads in the state capital are empty of the usual human and traffic just as shops and business premises are closed.

There is no visible patrol movement of security agents nor the presence of the outlawed IPOB members on the streets.

It was a similar situation at the over-projected nearby Orieugba market which was a ghost of itself.

Gov. Okezie Ikpeazu had Sunday night said Abia traders would not be compelled to open their shops today if they chose not to do so.

To ensure law and order as residents of Imo state obey the sit-at-home order given by the Indigenous Peoples of Biafra (IPOB), combined teams of security agents drawn from the army, police, navy and sister agencies have cordoned off strategic areas identified as flashpoints in and around Owerri and its environs.

Our correspondent gathered that there is a heavy military presence along Aba – Owerri road, specifically at Naze No 1, Akachi Road where some airforce men were alleged to have been killed on Saturday.

There is also a heavy security presence at Okigwe Road and at Imo State University round about.

The same scenario is replicated at Orji Fly over and Amakohia/Akwakuma flyover.

However, the situation is different at Dick Tiger junction by Egbu Road, on the road to Enyiogugu Mbaise with scanty military presence.

Similarly, men of the anti kidnapping unit in their patrol vans have taken over Umezurike Hospital off Royce Road, while Ama JK along Douglas Road, Control Roundabout, Concord Hotel Road by first inland road junction and Protea Hotel are no go areas.

It’s also difficult for motorists going to the Airport as Airport Junction Aba-owerri Road and obiangwu-Ngor Okpala where a former presidential aide, Ahmed Gulak, was killed on Saturday are no go areas.

The situation is also the same at Nguru and Logara where military presence is quite noticeable.

There is total compliance to the directive of indigenous people of Biafra IPOB for people of southeast to sit at home to respect those killed in the Nigerian civil war in Anambra state.

Businesses have been shut down, and residents shut inside their homes.

The ever-busy Unizik junction along Onitsha – expressway and the popular Eke Awka and markets in the capital were shut down.

Many streets in Awka are converted to football pitches by the youths, while some people were seen in places celebrating the total compliance of the directive.

One of the youths in the Awka Chinenye Okafor said he was pleased that the directive to sit at home was successful.

Another resident, Taiwo Ogundare who wanted to trek to Aroma from Unizik junction commended the Igbo for observing the sit-at-home directive.

He said that the compliance was to respect the heroes from Igbo extraction that lost their lives during the civil war.

He said the action was right and apt, noting that the sit-at-home order did not translate to anything wrong .

Report from Onitsha and Nnewi indicated that the sit-at-home order was successful as all shops and offices were shut.

Reports from different parts of Enugu capital city and other Neighbouring towns like Agbani and Ninth Mile indicated full compliance by the residents as commercial activities were suspended throughout the day.

Major markets in the capital city including Ogbete, Old and New Kenyatta, Garriki, Artisan, Abakpa, Orie and Eke in Emene were completely shut while major shopping malls and street traders did not open.

There were security patrols and police helicopter surveillance across the city but there was no report of major clashes between the security agencies and the pro-Biafra activists.

However, a police officer said as was said to have been shot dead around Coal Camp area by unknown gunmen and photograph of his corpse was circulated in social media but the circumstances that led to his death could not be co confirmed by press time.

At least two persons were confirmed dead in a shootout between the police and suspected IPOB members who tried to forcefully enforce the sit-at-home order in Ebonyi State.

Even though the Police said one person was killed, sources said two bodies were deposited in the morgue following the shooting.

Reports said there was heavy shooting as polive mobilized armoured tank to confront the hoodlums who were burning vehicles to force compliance with the sit-at-home order.

The shooting was reported in Nnodo in the Ebonyi Local Government Area of the State; a surbub of the Abakaliki capital.

Cars and motorcycles were set ablaze as IPOB members who tried to enforce compliance attacked residents violating the IPOB’s order.

In response, the police was reportedly mobilized leading to the shooting during which deaths were recorded.

Police spokesperson, DSP Loveth Odah, said a  hoodlum was killed in a gun battle with the police.

She explained that hoodlums were intimidating and forcing people to comply with the “sit-at-home’’ directive by the outlawed group and had to be stopped.

She said members of the proscribed IPOB were intercepting motorcycles, molesting, threatening and shooting sporadically into the air to scare people from engaging in their normal activities.

DSP Odah added that the police had secured the area and embarked on a “show of force’’ to maintain law and order in the state.

“One of the hoodlums lost his life when they opened fire on our men.

“People were going about their legitimate businesses and activities in the area but the hoodlums were distracting and forcing them to obey the IPOB’s sit-at-home directive.

“They blocked some axis in the metropolis, collecting motorcycles and burning them,’’ Odah said.