By Fidelis Egugbo PEOPLE who are familiar with the game of hockey will know that it is not for the lily-livered. The game requires... 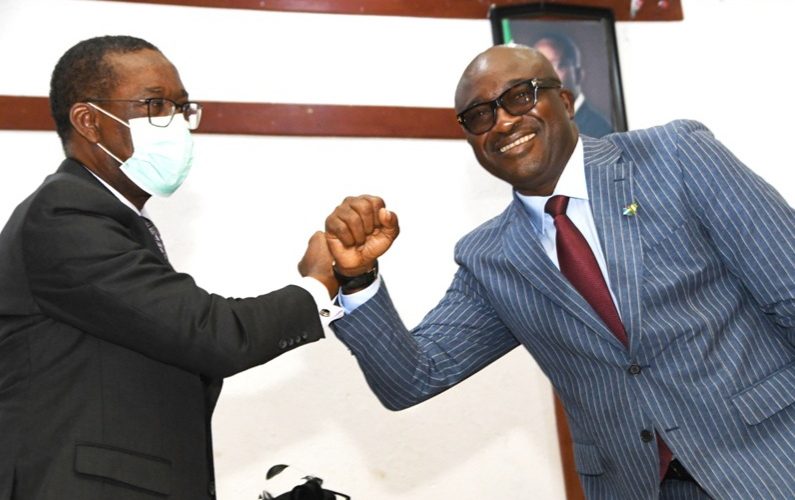 PEOPLE who are familiar with the game of hockey will know that it is not for the lily-livered. The game requires a lot of focus, maneuvering and skills to enable you score. Chief Patrick Ukah, who took oath of office as the Secretary to the Delta State Government (SSG) on Monday, is not only a skilled hockey player; he is an attacker in the game and a renowned goal scorer.

Ukah played hockey both locally and at the international scene and, at a time, he was the President of Nigeria Hockey Federation (NHF).  He is also, very passionate about golf. His uncommon love for games that require a lot of focus and hit-on-target is endearing.

Born in Jos, Plateau State, Ukah, whose parents are from Okpanam and Ibusa  in Oshimili North Local Government Area of Delta State, is married to Barrister Perpetual Ukah and the marriage is blessed with children.

As if guided by unseen hands shaping his life for the challenges in later years, Ukah sojourn saw him living in Jos, Agbor, Auchi, Ife, Lagos and, as such, he is multi-lingual.

As a journalist, I had known him for years, before Governor Ifeanyi Okowa recognized his potentials as a fine coordinator and goal scorer and made him the Commissioner for Information in the state.

In his capacity as the Commissioner for Information, Chief Ukah did not only manage the information of the state, he became the number one marketer of Delta and Governor Okowa’s administration. Ukah holds a rare record in sports marketing through his company, Ventolite Sports Management Consultants; and, he combined such knowledge in corporate marketing with his expertise in Public Relations to package and showcase Delta to the world.

As the Commissioner for Information, what he was doing was more of rebranding Delta as he introduced a state logo, anthem and several others.

Naturally, as a sports administrator, who is ready at all times to be in the field of play, Ukah served in several committees during international football matches played at the Stephen Keshi Stadium, which Governor Okowa’s administration has successfully bequeathed to Deltans as one of its legacy achievements.  One could not also forget in haste that Ukah played key roles in the burial of Nigeria’s international footballer and former national team coach, Stephen Okechukwu Keshi.

From the Ministry of Information, where he successfully managed the first four years of the Okowa administration, including his campaign for second term in office, as the state’s image-maker. Ukah, as one whose impressive goal scoring ability has been recognized, was moved to the Ministry of Basic and Secondary Education as the commissioner in charge of that ministry.

Within two years of being in the Ministry, Ukah did not only bring new innovations, he took hard stance for the benefit of pupils and students. His characteristic having an eye on the ball always made it such that a lot of building projects were initiated and completed during his tenure as the Commissioner for Basic and Secondary Education.  This was attested to during the recent inauguration of several projects executed by Governor Okowa administration.   A lot of projects executed by the Ministry of Basic and Secondary Education under the watchful eyes of Ukah were inaugurated across the state.

As a Commissioner, Ukah also wielded the “big stick”, shutting down private schools that were engaged in unhealthy activities, demoting teachers found wanting in their jobs, among others. Obviously, in the two ministries that he has served so far, he scored a lot of goals for Governor Ifeanyi Okowa’s administration.

Even after he was relieved of his position as a Commissioner, as a result-oriented person, he successfully packaged the 6th anniversary celebration of Governor Okowa’s administration.   Ukah was the Chairman, Organising Committee for the event.

Governor Okowa believes that Deltans deserve the best and he always goes for the best; but Okowa’s choice certainly took many people unawares as they were not expecting him to make Ukah the SSG.

In short, Ukah was not in their permutation; and, definitely, with his appointment, Governor Okowa has proven star-gazers wrong.   A lot of persons believed that since he was in the last lap of his administration that he would appoint one of his kinsmen, an Ika man or woman to man the office of the SSG.   However, as a democrat, a pan-Deltan and as a man who has seen the delivery of his appointees, he singled out Ukah for the appointment.

Ukah’s appointment certainly has sent jitters into the spines of a lot of persons.   It shows that Governor Okowa would spring more surprises with the composition of the state executive council.  He has let the door open for lobbying (of course, a new person has to emerge as a commissioner from Oshimili North) but he also has shown that he is in charge and will always do his best for the people.

With two years to the end of his administration, what he wants and what the people deserve is more goals. That his administration has scored several goals is not in doubt, but the last lap of a game is very tough and critical.   While he will not want to concede any goal, he wants to score more goals for Deltans and humanity.

So, the question is, who are those that will make the team to play different roles in the game as Ukah is already ahead working for more goals to be scored.

Yes!  Ukah, as a goal scorer in Hockey and Golf, is already positioned to ensure that the game is interesting till the final blast of the whistle on May 29, 2023.

Naturally, Ukah must have dropped points in some games, and in politics he has always aspired to represent his people, the people of Oshimili North Constituency in the House of Assembly.   So, he also understands what it means to lose and what it takes to win in the game of politics.

In the present situation as the SSG, losing is not an option as he has all that is required and even more to deliver the goods.

Governor Okowa deserves accolades for putting a square peg in a square hole no matter whose ox is gored.    At the swearing-in ceremony of Ukah as the SSG, Okowa said, “Ukah is bringing to the office of the SSG a working knowledge of our policies and programmes and is well grounded to see to their effective implementation in his current position.   But beyond that, the new SSG possesses an unpretentious mien, humble outlook, and bubbly personality that I believe will serve him well in this new assignment.

“I have always said that the office of the SSG requires a person who is able to marry policy – where the administration wants to go – and politics – how it mobilizes resources, personnel and the necessary support for the agenda of government.

“The SSG must not only have the capacity and competence to drive the administration’s policies and programmes, he must also be a consensus-builder and adept at managing various persuasions and handling conflicts, internal and external.  Hence, it is required of any SSG to be broad-minded, accessible and flexible, with a good sense of fairness and justice.”

While expressing optimism that the SSG would continue in the same spirit of sacrifice, hard work and dedication, the governor said “no doubt, the office of the SSG will present a different kind of challenge”, adding, “I have always been impressed by Ukah’s willingness to learn and ability to adjust quickly to situations. It is, therefore, my expectation that he will justify the confidence reposed in him with this appointment.”

As the governor constitutes another team, the team that will possibly be with him until the end of his tenure in 2023, he needs the prayers of all well-meaning Deltans, nay Nigerians, for him not to be distracted in any way for Deltans to get the best always.

Congratulations, Chief Patrick Ukah, the Akatakpo-Enyi of Okpanam Kingdom, as we look forward to you scoring more goals as the SSG!

Egugbo is the Special Assistant, Media, to Governor Ifeanyi Okowa of Delta State.