Nigeria’s football firmament was emblazoned in all-yellow on Thursday as the Nigeria Football Federation and MTN Communications signed a partnership agreement that made the...

Nigeria’s football firmament was emblazoned in all-yellow on Thursday as the Nigeria Football Federation and MTN Communications signed a partnership agreement that made the telecommunications company the “Official Communications Partner of the Super Eagles and other National Teams.” 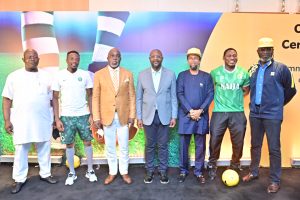 At an event attended by, among other eminent dignitaries the Honourable Minister of Youth and Sports Development, Mr Sunday Dare in Lagos, both parties inked an agreement that is worth N500 million-a-year with several other opportunities and possibilities in the mix as the contract runs.

“This is something I will call a marriage of the king of telecom and the king of sports. MTN is the king of telecom and Football is the king of sports, as is well –established. This event today is in sync with the thinking and desire of the Federal Government and the Federal Ministry of Youth and Sports for our sports federations – which is for them to be self –funding. I appreciate MTN for taking this step and I encourage other corporate bodies to come and partner with our sports federations. Government alone cannot do it all.”

President of the NFF and FIFA Council Member, Mr Amaju Melvin Pinnick lauded MTN for its patience, doggedness and forthrightness along the line while the partnership was being processed, and said he was overwhelmed with joy that the day has finally come to consummate a relationship that he had dreamt so much about over the years.

“MTN is a really big and capable partner to have on your side. I thank them for their forbearance while the process was on and so many crooked sticks were turning up. My joy is that today has come. We have this vision as a Board of the NFF to achieve absolute self-funding for the Federation before we leave office, and I believe that with this, we are walking close towards realizing our vision.”

Chief Executive Officer of MTN Nigeria, Karl Toriola said his company was also excited to partner with Nigeria Football, which he described as “a platform to support a force that greatly unifies Nigerians,” saying it has always been the dream of his company since coming into Nigeria 20 years ago to find and utilize a platform that unites and impacts on the lives of Nigerians.

“No platform unites, excites and entertains people and nationalities more than football. MTN sponsored the FIFA World Cup South Africa 2010 – the only one that has been held on African soil till date. We have also sponsored several editions of the AFCON. Even though this is our first time getting involved with the National Teams in Nigeria, we have sponsored several grassroots and impactful programmes on football in this country. It is a delight to get onto the really big time with the NFF and it is an opportunity we do not take for granted.” Chairman of MTN and pioneer Vice Chairman of the Nigeria Communications Commission, Dr Ernest Ndukwe described the union as “a significant partnership.”