Nigeria got their campaign for a seventh FIFA World Cup finals appearance off to a bright start with a 2-0 win over Liberia in...

Nigeria got their campaign for a seventh FIFA World Cup finals appearance off to a bright start with a 2-0 win over Liberia in wet conditions in Lagos on Friday. 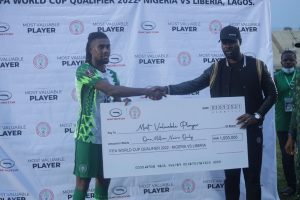 Iwobi collecting the cehque for Most Valuable Player.

who was also among the goals when the Eagles commenced their Russia 2018 campaign on solid footing against Zambia in Ndola in October 2016, netted a first half brace that took some of the fight out of the resilient Lone Stars but never put them in depression at the Teslim Balogun Stadium.

Both teams came out guns-blazing, understandably, but the Eagles came close to drawing the first blood when a clever move by Kelechi Iheanacho and pass by Alex Iwobi ended with Joseph Aribo’s grounder drifting lazily away from goal in the 15th minute.

Three minutes later, Iwobi scoffed his shot from the edge of the box, and in the 21st minute Ola Aina’s powerful lash from 20 yards was diverted. From the resulting corner kick, Iwobi and Iheanacho exchanged passes, with the latter’s fierce grounder flying past goalkeeper Ashley Williams.

Four minutes later, Sampson Dweh tested goalkeeper Maduka Okoye with a well –placed shot from 25 yards, but the Nigerian goal-tender was up to the task.

Just before the break, Kelechi made it two by placing the ball well beyond the reach of Williams in a one-on-one from a goalmouth melee, and Nigeria went into recess with good feeling.

A minute into the second half, Victor Osimhen had the opportunity to make it 3-0, but got too much purchase on his first touch that took him clear of Jeremy Segbay, and Williams came out early to foil the move.

On the hour mark, Osimhen, who fought hard all of the 77 minutes he was on duty to register a goal, came closest with a thumping header from a corner kick by Moses Simon but was again denied by Williams’ reflex save.

With 20 minutes to go, Ayouba Kosiah came quite close to reducing the tally, but saw his shot from the left flash past Okoye’s goal.

NFF partner, 33 Export gave a cheque of N1million to Kelechi Iheanacho, adjudged as Man of the Match. The presentation was made by Senior Brand Manager Aishat Anaekwe and Brand Manager, Wasiu Ola Abiola.

Another NFF partner, GAC Motor gave a cheque also for N1million to Alex Iwobi, adjudged the Most Valuable Player of the Match.

The win saw the Eagles leap to the top of Group C of the African campaign, with Central African Republic and Cape Verde having battled to a 1-1 draw in Douala on Wednesday.

The Eagles will now fly out of Lagos in the early hours of Monday to the island of Mindelo, where they play Cape Verde’s Blue Sharks in a Day 2 encounter on Tuesday evening.