The Governor of Rivers State, Nyesom Ezenwo Wike, says that with the infraction of the constitutional provision on collection of Valued Added Tax (VAT)... 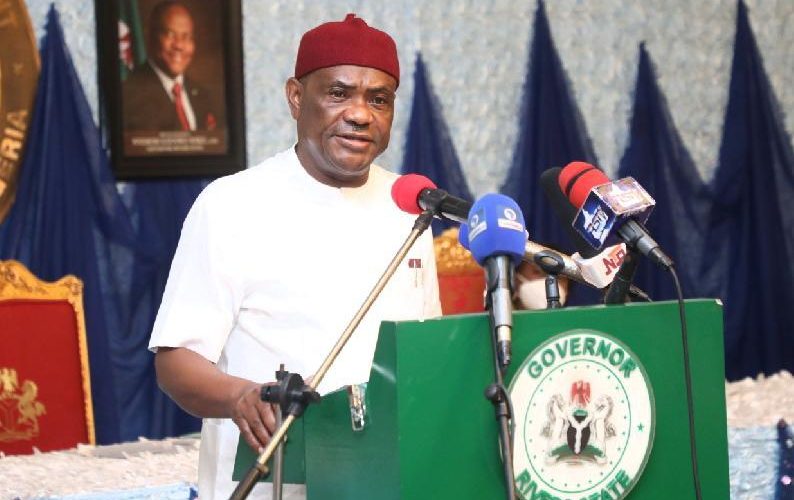 The Governor of Rivers State, Nyesom Ezenwo Wike, says that with the infraction of the constitutional provision on collection of Valued Added Tax (VAT) addressed, his administration has fully commenced the implementation of the State’s VAT Law.

The governor made this known at an interactive session with representatives of corporate organisations at the Banquet Hall of Government House, Port Harcourt on Wednesday.

He said that it was necessary to state the position of the law to the business community in the state.

According to him, such understanding will enable them not to fall prey to the antics that can be deployed by the Federal Inland Revenue Service (FIRS) officials, who think they can use force to collect what does not belong to them.

Governor Wike explained that FIRS had in the past collected VAT in the State with impunity, knowing it was unconstitutional for them to do so.

According to him,  his administration challenged their impunity in court and the Federal High Court in Port Harcourt, in its declarative ruling had stated the constitution is right in vesting powers to collect VAT in the State government within its jurisdiction.

“When we challenged the Federal Government through the Office of the Attorney-General and FIRS in court, do you know what they did? They wrote this letter dated 1st of July 2021. Remember, it was in 2020 that we filed this action against them. But see how corrupt this country is.

“Corruption is not only about kickbacks,  it is also about doing something illegally. We were in court in 2020.Then on July 1st 2021, the chairman of FIRS wrote  to the National Assembly through the office of the Deputy Speaker of the House of Representatives.

“He was asking them to amend the constitution and insert VAT under item 58 of the exclusive legislative list, when we were already challenging that it is not their responsibility to collect VAT.  They knew that what they were doing was not the right thing.”

Governor Wike stated that his responsibility in office included making sure that Rivers people are not denied their entitlements.

He described as unfortunate that FIRS has resorted to writing threatening letters to intimidate corporate organisations to pay them even after they have lost their appeal that sought a stay of execution of the declarative ruling on VAT collection in the State.

Governor Wike urged the business community to be ready to pay VAT for the month of September 2021 and subsequent months to the Rivers State Internal Revenue Service. According to him, he has already assented to the Rivers State VAT law passed by the State House of Assembly.

The governor warned corporate organisations not to feign ignorance of the State VAT law. He declared that the State government will not hesitate to seal  up the premises of any company that defaults.

“We are going to inaugurate the Tax Appeal Commission by Friday which will be headed by a retired judge of the state.”

Governor Wike described the disparity in VAT proceeds and what is given to the States as an inexplicable form of injustice that weakens the performance potential of the states.

“Let me tell you the injustice in this country. In the month of June 2021, which we shared in July,  VAT collected in Rivers State was N15.1billion. What they gave us was N4.7billion. See the gross injustice and this money includes contracts awarded by the Rivers State Government.

“This is not an issue of the party, it is the issues of infraction of the constitution, issues of illegality. Look at Lagos, it is not the same party as mine. In the month of June 2021, the VAT collected in Lagos was N46.4 billion but see what Lagos got, N9.3 billion. Have you seen the injustice in the country? VAT collected in Kano was N2.8 billion and they gave them N2.8 billion. Is there any justice in this country?”

Governor Wike described as morally offensive a situation where Rivers State government will award contracts for State roads worth N200 billion Naira and the FIRS will illegally receive 7.5 percent of the amount as VAT to be distributed among the States.

“So you allow me to call the big companies, award contracts to them, then you, FIRS, come and collect the tax and  then go and distribute it to other states who are not awarding contracts. How does it sound.”

The governor noted that nobody has been courageous to challenge the illegally perpetrated by FIRS and that  history will be kind to Rivers State to have mustered the courage to speak out and also challenge it.

According to Governor Wike,  Nigeria is a constitutional democracy and not a military government where rule of law is grossly disregarded.

“I overheard the FIRS chairman saying that I’ll soon know the power of the Federal Government. And that they’ll show me that they have the power to muzzle the judiciary.  You can muzzle them as you want. Let the Court of Appeal and Supreme Court interpret the law so that all of us will go and rest.

“Use all the power you want to use, but history will be written one day and those who will allow themselves to be used to muzzle and misinterpret  the law will face God one day.”

Governor Wike pointed out that it is not possible for all states to be at equal standing or be mechanically placed in position of performance without allowing them to exercise their rights within the condition.

He advocated that the federating states  should be allowed to explore their creative abilities in utilising the functions as provided in the constitution in order to grow.

On his words, “The powers have already been devolved in the constitution but the federal government does not allow us. All they want us to do is to come and beg and I say I will not beg. Give me what the law says I should get.”