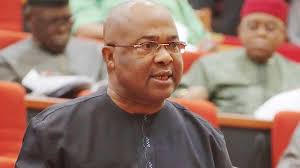 RESOLUTIONS REACHED AT THE CRUCIAL STAKEHOLDERS’ MEETINGS BOTH AT HOME (PHYSICAL) AND VIRTUAL AND ALL TRADITIONAL RULERS AND PRESIDENTS – GENERAL OF TOWN UNIONS...

RESOLUTIONS REACHED AT THE CRUCIAL STAKEHOLDERS’ MEETINGS BOTH AT HOME (PHYSICAL) AND VIRTUAL AND ALL TRADITIONAL RULERS AND PRESIDENTS – GENERAL OF TOWN UNIONS IN AGWA IN OGUTA LOCAL GOVERNMENT AREA, IMO STATE ON MONDAY, 6/9/2021 AND WEDNESDAY, 8/9/2021 RESPECTIVELY.

Following the recent disturbing and nightmarish aerial surveillance and confirmed search on some parcels or portions of farmlands belonging to Agwa, Ejemekwuru, Akabor and Izombe (Ohaoma axis) known as “BENCOV AREA” by a delegation of the Imo State Government led by the office of the Deputy Governor and the Interim Management Committee Chairman of Oguta LGA, *Hon. Emma Mazi, who came with the spurious claim of trying to acquire the land for the purposes of Integrated Agricultural Project* which is highly suspected to be a subterfuge for the implementation of the widely rejected “Rural Grazing Area” (RUGA) in Nigeria designed to forcefully allocate people’s lands to the Fulani herdsmen for their cattle businesses with their concomitant wanton destruction of farmlands, property and gruesome murder of innocent citizens in the herders’ grazing areas, the above stated meetings were convened to help the Agwa people appraise, review and take informed decisions on the subject matter and speak in one voice under a common platform.

After a critical and careful review of the merits and demerits of the arguments advanced by the said delegation of the State Government in support of the said project, critical stakeholders of Agwa in Oguta Local Government Area of Imo State, including but not limited to all the traditional rulers (Ndi Eze Agwa), town Union executives, women, men, youths, the clergy, the elites and Agwa sons and daughters living at home and in the diaspora, arising from their well attended meeting held via Zoom on the 6th day of September, 2021 and a follow-up physical meeting held in Agwa on the 8th day of September, 2021 came up with the following *resolutions*:

A. That the aforementioned Agwa stakeholders are in unison in the unequivocal rejection of the Greek gift called *Integrated Agricultural* *Project* and shall NOT allow the parcelling, ceding or forceful taking over of any piece, parcel or portion of our land for the purposes of the said Integrated Agricultural Project under any form it may be masqueraded, since our meager land mass is not enough for our expansion and farming purposes as predominantly agrarian farmers.

B. That we adopt and accept in totality, the resolutions by the Concerned Citizens of Ohaoma Communities in Oguta Local Government Area, on the subject matter, same being satisfactorily representing our interests, thoughts, opinions, views and convictions.

C. That our rejection of the RUGA policy is further strengthened by our conviction that if it is allowed to have a footing on any Agwa soil and/or its neighbours, it would be suicidal and detrimental to the lives, property and interests of our people and children yet unborn as seen in other parts of Nigeria such as; Benue, Plateau, Nasarawa, Ogun, Ondo States etc, who are daily fighting to protect themselves from the marauding activities of the criminal and murderous herders/bandits who wield dangerous weapons like AK 47 etc to unleash their pillage, carnage and nefarious activities on hapless citizens.

D. That the gruesome murder of our brother, *Late Mr. Ozoemena Iriaka* on his farmland around the proposed area by the criminal herders being fresh in our minds, it would be foolhardy of us to allow a repetition of such in our home by accepting the criminal elements to cohabitate with us.

E. That any Agwa person (no matter how highly placed) who allows himself/herself to be used, enticed, lured or induced to sabotage in any guise, our collective decision rejecting the said policy or does anything whatsoever in an attempt to facilitate or aid the implementation of same in any colouration, shall be perpetually ostracized and/or excommunicated with his/her family in Agwa.

F. That electronic and print media should be used to publicize these resolutions. All Agwa sons and daughters in the media profession (fourth estate of the realm), should work as a team in this regard to give it the needed publicity.

G. That a strong synergy would be formed/sustained with our Ejemekwuru, Akabor, Izombe and Ohaoma neighbors to effectuate these resolutions and maintain our common grounds.

H. That until Agwa Central Union is officially birthed, the Central Association of Agwa Towns Union (CAATU) is adopted as the umbrella body representing Agwa in this regard or in any other matter of interest. Anyone having any business with Agwa devoid of the aegis of *CAATU*, does so at his/her peril and should be discountenanced.

I. Should the Government insist on the forceful take over of the said land or any other land within the Agwa territory for the highly vexatious RUGA policy in any garb whatsoever it may be clothed, a legal team of all Agwa Lawyers to be coordinated by *Barr. (Dr.)* *Dom. Akabuiro* should initiate immediate legal proceedings to forestall such and/or seek appropriate redress in Court.

J. That financial contributions should be solicited amongst Agwa sons and daughters to ensure that money is not an impediment towards the actualization of the set goals.

We call on all lovers of Agwa to support this move using all the resources at their disposal for the future of Agwa.