Gov. Douye Diri of Bayelsa has received the approval of the Bayelsa House of Assembly to restructure the state’s commercial debts with some banks,...

Gov. Douye Diri of Bayelsa has received the approval of the Bayelsa House of Assembly to restructure the state’s commercial debts with some banks, to ease the state’s monthly debt servicing obligations. 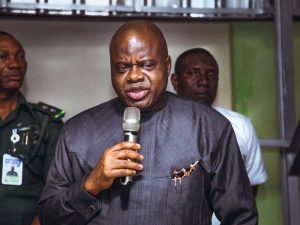 Diri had in September 2020 secured the approval of the Bayelsa House of Assembly to obtain N17 billion loan from multiple sources.

According to data obtained from the Debt Management Office’s website, Bayelsa’s debt profile as of June 2021 stood at over N150.60 billion, up from the N123 billion the present administration inherited when it came to power in Feb. 2021.

The State Assembly had, on resumption from its recess on Wednesday, approved the request by Diri to restructure existing loans with commercial banks.

The governor had stated in a letter to the Assembly, read on the floor of the House by the Clerk of the Assembly, Mr Edward Owudogu, that the restructuring of the facility would extend the tenors of the loans, thereby freeing up funds for critical developmental projects.

“It has become increasingly difficult for the state government to fulfil its debt obligations. The debt burden is due to the increasing demands on limited resources and huge burden of inherited debts from previous administrations”, Diri told the lawmakers in the letter.

The governor further explained that the approval of the house was necessary to enable the government renegotiate the tenor and rates of existing commercial banks’ loans, for more favourable monthly repayments.

Hon. Tare Porri, Chairman, House Committee on Information and Orientation, said that the House approved the request, to enable the State to meet its developmental target.

“Lack of funds caused by the present economic realities is affecting the infrastructural drive of the Governor”, Porri noted.

It would be recalled that the Assembly had on March 5, 2020, approved a loan of N2.9 billion from commercial banks with a tenor of three years, for the purchase of cars.