Governor Nyesom Wike of Rivers State has charged the Revenue Mobilisation Allocation and Fiscal Commission (RMAFC) to reduce revenue accruable to the Federal Government from... 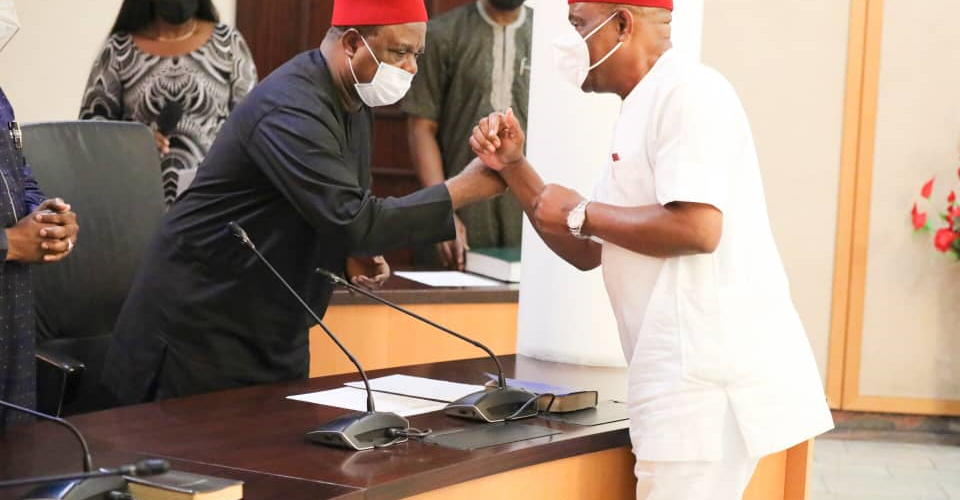 Governor Nyesom Wike of Rivers State has charged the Revenue Mobilisation Allocation and Fiscal Commission (RMAFC) to reduce revenue accruable to the Federal Government from the federation account to 40 per cent.
He made this known when members of the RMAFC  led by its chairman, Elisa N. Mbam, paid him a courtesy visit at the Government House, Port Harcourt on Wednesday.
The governor also called for an upward review of revenue accruable to States of States and local government councils to 40 and 20 per cent respectively.
According to him, the current revenue sharing formula that allows the federal government to take 52.68 percent, and the states and local government councils to take 26.72 per cent and 20.60 per cent respectively is unacceptable.
He also observed that in spite the changes that the country had gone through in the past 29 years, it was regrettable that Nigeria had been using the 1992 revenue formular prescribed by erstwhile military administration.
Wike faulted the use of 1992 population figure, public school enrolment and public hospital bed spaces, land mass as formular for allocation of revenue.
He argued that a more equitable formular should also take into cognisance current population figure as well enrolment in private schools and number of bed spaces in private hospitals.
Wike said: “Using the same formular of 1992 as a basis for revenue allocation in this country is so unfortunate. And to worsen the situation under a democratic dispensation, since 1999 till now, our country has not reviewed the revenue allocation formular.”
The governor urged the commission to reduce the revenue accruable to the federal government to 40 percent because the it has abdicated its responsibility of providing security and basic infrastructure to the federating states.
“You people should reduce the percentage of the federal government. Give them 40 percent. Give the states 40 percent, give Local Government 20 percent.
“In that way, most of the responsibilities that belong to the federal government will now be taken away and given to the States,” he said.
He noted that the current centralised federal system in operation in Nigeria has made it impossible for most states to look inwards and harness their potentials.
According to him, the country’s vast resources, will continue to amount to nothing if the states  are not allowed to use their resources to drive and determine their development.
“We cannot talk about operating a federal system without having a fiscal federalism. It is practically impossible. Let’s cancel that word federalism, we are operating a unitary system.
But you cannot be saying we are operating a federal system, at the same time operating a centralised system,” the governor said.

The governor expressed reservation about the willingness of the present federal government to implement the recommendations of the revenue mobilisation and fiscal commission, which is currently holding public hearing on new revenue sharing formular across the six geopolitical zones.

The RMAFC chairman said that one of the major mandate of the commission is to review from time to time the revenue allocation formular to conform with changing realities.
Mbam explained that it has become necessary to review the current formular because the last review was done in 1992.
He observed that there has been a lot of changes in the political and socio-economic situation of the country.

According to him, the data that will be collated from the states will help the commission to arrive at a fair revenue formular.

“We believe that what we will get from states will help us to come up with a revenue formular that will be fair, just and equitable.”

He commended the governor for his developmental stride and urged other states to emulate Rivers State.