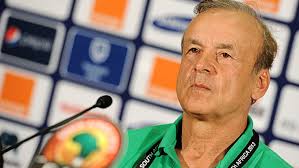 The Super Eagles will tackle the Lone Star of Liberia at the Grand Stade Tangier in Morocco on Saturday, 13th November and then fly into Lagos for the final group game against Cape Verde’s Blue Sharks at the Teslim Balogun Stadium on Tuesday, 16th November.

Top of their pool with nine points but hotly chased by seven-pointer Cape Verde who host Central African Republic on the island of Mindelo, the Eagles need the three points against the Lone Star on the neutral turf of Morocco’s principal northern city to remain on firm ground when hosting the Blue Sharks three days later in Nigeria’s commercial and industrial capital.

Leicester City of England’s midfield enforcer Wilfred Ndidi, who missed the last round of games home-and-away against Central African Republic, is back in the trough, just as fellow Premiership boy Alex Iwobi and Spain-based forward Samuel Chukwueze.

Coach Rohr has this time extended invitation 2019 Africa Cup of Nations’ top scorer Odion Jude Ighalo, who announced his retirement from the international game following that AFCON feat in Egypt.

The invited players and overseas-based members of the technical crew are to report directly to the city of Tangier on Monday, 8th November while technical officials from Nigeria are to report in Tangier the same day.

Hadejia, who is also President of the African Beach Soccer Union, will attend high-level Beach Soccer Workshop, launch of the Beach Soccer 2022 Season Calendar and Beach Soccer Stars Global Awards presentation all scheduled for the storied commercial capital of the Emirates.

A letter personally signed by the President of Beach Soccer Worldwide, Joan Cuscó, read: “Let me inform you that the Tecnotree Intercontinental Beach Soccer Cup Dubai 2021 to be hosted from 2nd to the 6th of Novermber and the Beach Soccer Stars 2021, to be hosted on the 6th November of 2021 are the next Beach Soccer events to take place this year and both will be organized in the city of Dubai (UAE).

“Beach Soccer Worldwide kindly invites you to come and represent African Beach Soccer Union to talk and discuss about the next calendar of 2022. It will be our honour to count on your presence.”

Hadejia and his team in the Nigeria Beach Soccer League have been working assiduously to see that the Nigeria Football Federation returns the Beach Soccer National Team to international competitions, through excellent promotion of the game on the home front, and taking the league round different corners of the country to create much-needed awareness, passion for the game and discovery of new players.