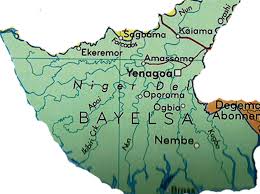 An operative of the Nigeria Security and Civil Defence Corps (NSCDC) and four contract staff at Conoil field in Koluama 1 in Bayelsa kidnapped...

An operative of the Nigeria Security and Civil Defence Corps (NSCDC) and four contract staff at Conoil field in Koluama 1 in Bayelsa kidnapped by suspected pirates on Dec 1 have regained freedom.

“Our colleague and four others abducted are back and we are still on the trail of the hoodlums who perpetrated the dastardly act. We were supported by members of the community and sister security agencies.

“The Command has always build a cordial relationship with members of communities where our men are deployed and this helped us in this situation.

“We are still on the trail of the criminals and remain optimistic that they will be soon apprehended to face the law,” Ogbere said.

Also a family member of one of the victims who wished not to be named confirmed that the abducted five people were freed in the Koluama forests on Tuesday evening and that no ransom was paid.

He said that the sea pirates had contacted the family to demand N25 million for their release.

It was learnt that the five victims of the abduction incident were kidnapped while on their way to Koluama 1 in Southern Ijaw Local Government Area (LGA).

The four abducted contract staff are employees of a catering contractor to Conoil were seized along with supplies for the personnel at the Conoil location in Koluama 1 from Yenagoa.

Community youths in Southern Ijaw LGA had raised a search party shortly after the incident occured eaight days ago.

It would be recalled that on Nov 27, unknown gunmwn  suspected to be pirates attacked and killed an NSCDC official and two oil workers, while seven others were kidnapped at the creek of Nembe local government area of the state.

The state government had earlier imposed a curfew on the waterways and also banned the use of speed boats with 200 Horse Power Engines on all waterways in the state.

Efforts to speak with the spokesman for Conoil, Mr Abiodun Azeez, was not successful as he neither answered calls nor replied the text message sent to his mobile phone.