(AP) — Uhuru Kenyatta, the son of Kenya’s founding president, ascended to the country’s top office Tuesday during a jubilant celebration that began a... 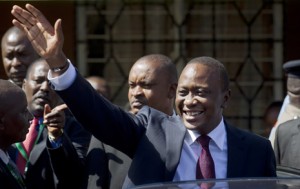 (AP) — Uhuru Kenyatta, the son of Kenya’s founding president, ascended to the country’s top office Tuesday during a jubilant celebration that began a new era in Kenyan politics, one that forces the U.S. and Europe into a diplomatic balancing act.

Amid the dancing and cheering of a sea of red-clad supporters, Kenyatta, his deputy and Uganda’s president made known their displeasure at U.S. and European efforts to steer Kenyan voters to another candidate, outgoing Prime Minister Raila Odinga.

The U.S. and Europe had hoped to avoid having a Kenyan leader who is now the second sitting African president to face International Criminal Court charges. Kenyatta, 51, faces charges of crimes against humanity for allegedly helping to orchestrate the vicious tribe-on-tribe violence that marred Kenya’s 2007 presidential election.

The U.S. has said a Kenyatta win would have “consequences,” though many analysts think the effects will turn out to be minimal given that Kenya is the lynchpin of East Africa’s economy and is a major security partner, especially in the fight against Somali militants.

“I want to salute the Kenyan voters on one other issue — the rejection of the blackmail by the International Criminal Court and those who seek to abuse this institution for their own agenda,” Ugandan President Yoweri Museveni — who spoke on behalf of a dozen African leaders in attendance — told the boisterous crowd.

“They are now using it to install leaders of their choice in Africa and eliminate the ones they do not like,” he said.

Incoming Deputy President William Ruto — who also faces ICC charges for the 2007-08 violence — noted that he and Kenyatta won in the first round of voting despite the U.S. warning.

Kenyatta repeated words he said after the election commission first named him the winner.

“I assure you again that under my leadership, Kenya will strive to uphold our international obligations, so long as these are founded on the well-established principles of mutual respect and reciprocity,” Kenyatta said.

As the swearing-in was administered, the crowd roared so loudly it interrupted the ceremony. The U.S. ambassador attended, as did U.S. civil rights leader Jesse Jackson, who was an invited guest of Kenyatta.

The pageantry stood in stark contrast to a rushed ceremony closed to the public five years ago to swear in President Mwai Kibaki, whom political opponents accused of stealing the 2007 vote. Those suspicions set off weeks of tribal violence that killed more than 1,000 people.

It is that violence — and Kenyan leaders’ refusal to deal with it — that brought in ICC investigators. Kenyatta denies the prosecutor’s charges that he helped orchestrate the violence and has pledged to cooperate with the court. His trial is scheduled to begin in July. Ruto faces similar charges in a trial set for May.

Kenyatta’s lawyers have asked that the charges against him be dropped after the court in March scrapped charges against another Kenyan suspect charged as a co-conspirator.

Many Africa analysts have said they doubt the case against Kenyatta will go forward. What witness, a popular refrain goes, will be willing to testify against a sitting president in charge of the nation’s security forces?

Sudan’s President Omar al-Bashir is the other sitting African president facing war crimes charges. He is accused by the ICC of genocide and war crimes for violence carried out in the western Sudan region of Darfur, and the court has issued an arrest warrant for him.

Kenyatta — the son of Jomo Kenyatta — beat seven other presidential candidates with 50.07 percent of the vote. That slim margin over the needed 50 percent was challenged by Odinga — who got 43 percent — and civil society groups that complained of myriad anomalies in the voting process. The Supreme Court upheld Kenyatta’s win after nationally televised hearings.

That court process and requests by Odinga for peace helped Kenya avoid the bloody fighting the country saw for two months in late 2007 and early 2008.

Kenyatta made his way through a list of promises Tuesday — improved health care, more schools, and pro-business policies. He also spoke of the need to reconcile tribal grievances.

“We will not settle for a perfunctory peace that is disrupted every five years by an election cycle. Rather, we are calling and working towards a permanent peace, through which democracy is glorified rather than undermined. A peace that fosters unity,” he said.

Even as thousands cheered the day’s celebrations, some in the crowd had Kenya’s past violence on their mind.

“Kenyatta should put reconciliation as his priority. He must make sure we come as one nation,” said Ndungu Kariuki, a 35-year-old engineer who was at the ceremony. “The charges against Uhuru are framed. I was affected by the postelection violence and I know what happened. Kenyatta will be free.”

Thousands of Kenyans began arriving at the stadium as early as 5 a.m. on Tuesday, seven hours before Kenyatta took the oath from the country’s chief justice. Many wore badges with pictures of Kenyatta and waved red flags.

“I am excited because I am coming to witness the swearing in of a new president and his deputy,” said Newton Githaiga. “Normally in any election people are split, but in a few months people will be together. Kenyans should be reconciled because as a divided people we cannot go far.”