The Governor of Imo State, Senator Hope Uzodinma, has commended the Niger Delta Development Commission, NDDC, for its various interventions in the development of... 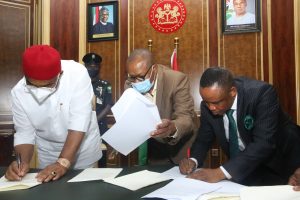 Senator Uzodinma, who spoke at the Imo State Government House, Owerri, during the signing of a Memorandum of Understanding for the completion of three major roads in the state, also lauded President Muhammadu Buhari and the Minister of Niger Delta Affairs, Senator Godswill Akpabio for directing the NDDC to complete all its on-going projects.

The NDDC Director of Corporate Affairs, Dr Ibitoye Abosede, explained that the MOU was for the dualization of Port-Harcourt-Owerri-Avu-Ada Palm-Etekwuru Road, Phase 1, Ohaji Egbema Local Government Area; emergency repairs of failed and unmotorable section of Nkwerre-Umudi-Isieke Nese Road with drainage and Nkwerre Internal Roads in Nkwerre Local Government Area, as well as the reconstruction and rehabilitation of Imerienwe-Etche Road.

The MOU for the projects was signed by both the Imo State Governor and the Secretary to the State Government, Chief Cosmas Iwu, while NDDC Interim Administrator, Dr Efiong Akwa and the Director Legal Services, Dr Stephen Ighomuaye, signed for the interventionist agency.

Governor Uzodinma said he felt fulfilled to enter into the understanding with the NDDC as it was making efforts to deliver on development projects across the Niger Delta region.

He stated: “The project has been delayed due to security challenges and poor capacity of the previous contractor. The expatriate contractor abandoned the job for some challenges and we have agreed to partner with the NDDC to ensure the completion of the road.”

Senator Uzodinma said two local contractors have been engaged by the state government to take over the roads and complete them despite the security challenges, stating: “The contractor will be encouraged to deliver within the shortest possible time.”

Earlier, the NDDC Chief Executive Officer, Dr. Akwa told the governor that the Interim Management was determined to complete all its projects as directed by President Buhari.

He remarked: “We are here to partner with the government of Imo State on three key road projects in the state. We had earlier mobilized an expatriate contractor but the company was scared away by security challenges.”

He noted that the joint venture between the Commission and the Imo State Government was meant to ensure the completion of Major road projects, especially the 24-kilometre dual carriage way linking Imo and Rivers states through oil-bearing communities in both states.

The NDDC boss explained that the road, which ran through Avu-Adapalm-Etekuru in Imo State to Ogba/Egbema Local Government Area of Rivers State, would connect several oil-producing communities.

Akwa condoled with the government of Imo State over the recent fire incident that claimed many lives at Obaezi in Ohaji/Egbema.

The Governor’s entourage and the NDDC team later inspected the on-going work at the Avu-Adapalm-Etekuru Road.